My name is Steve Carpenter and for almost a year I have been MennoMedia’s Director of Development. I raise money for our non-profit ministry. I love my job. Last year, when I told my preteen nieces about my work they said, “I would hate your job. I could never ask people for money.” I explained it’s not like that. I visit people who are already giving to our ministry, thank them for their support and give them one of our books as a token of appreciation. Over time I may invite them to increase their support, give to special projects, or include MennoMedia in their estate planning.

Recently I was interviewed by a woman with a job I would not like, even though it is a lot like mine. This person works for the American Institute of Consumer Studies. Late one Saturday afternoon, on a cold winter day, she rang my doorbell. She didn’t have an appointment. I had never met her before and I didn’t know the organization she represented. She was canvasing my neighborhood, making “cold calls,” not to sell something, but to conduct a survey. She looked cold and I felt sorry for her so I invited her in. She explained she would pay me $45 to complete a survey. I didn’t particularly need the money but she was a nice lady so I said yes. I offered her tea and for the next 90 minutes she asked about my consumption patterns. From a stack of more than 100 cards, each listing the name of one magazine, I was instructed to sort them into three piles: those I had definitely read in the last 6 months; those I may have read; and those I had not read. I was asked about how much and which TV programs I watched. 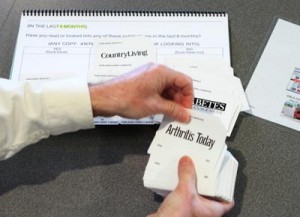 The questions went on and on for more than an hour. When the oral survey was done she gave me $5 and said I could earn the rest of the money if I did my “homework” by completing a thick survey book. I felt double crossed. Wasn’t I promised $45? Hadn’t I just given up a big chunk of my time on a Saturday afternoon? But, because I liked her I agreed to complete the book. 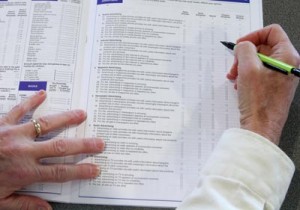 I spent another 3 hours working on it. Then I had to ask my wife to fill out a shorter section of the book. She too spent considerable time on it. Answering thousands of questions about such things as how much and what brands of toothpaste I bought in the last 30 days was a mind numbing task. When the interviewer returned four days later, I told her “The only reason I filled out the book was because I like you and I said I would.”

During her second visit, we talked about our jobs. She said she enjoys the travel, the flexible hours and the opportunity to gab while meeting new and interesting people. I told her my job had all of those elements but it doesn’t involve cold calls. I told her she would be a great development officer and recommended she check on openings at universities in Florida where she lives. She seemed genuinely pleased with the idea.

Each person has unique gifts and abilities. In my work, I’ve found an area where I can make a difference at MennoMedia and in some small way make the world a better place. I pray you too can find your niche and learn to “love your job.”