Last weekend, at the annual gathering of Mennonite Church Manitoba, I was honoured to have coffee with the British speaker, Stuart Murray Williams. Stuart is author of one of our current bestsellers, The Naked Anabaptist, and he has authored or co-authored three other titles that we have published. The latest, released this past fall, is The Power of All: Building a Multivoiced Church (coauthored with his wife Sian). 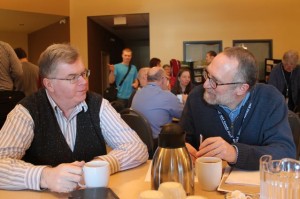 We were meeting in Winkler, a town where “Mennonite” still is associated with a mix of Anabaptist faith and a particular German-Russian ethnic culture brought by Mennonite immigrants in the last century and a half.

But here’s the thing that fascinated me as we talked: Stuart was invited by Mennonites in Canada to help rejuvenate them in their own sense of identity and mission. Isn’t it strange that a Baptist from the United Kingdom is given such a role? And this wasn’t the first time: Stuart has done this repeatedly in other Mennonite heartlands in North America.

On the weekend, Stuart preached about the need for pioneers like the apostle Peter who found himself opening the church doors to Gentile believers.  He spoke of the need for denominations—including Mennonites—to change or die.

Stuart’s books, along with his global speaking tours and his church planting work in the United Kingdom, all focus on what it means to be the church in a world where Christianity and the church no longer have a dominant influence in society.  Canada, and increasingly the US, seems to be following the UK toward a day when secularism dominates in the public square, and the church has lost members and influence.

Some of us who were raised in the Mennonite church find it gratifying that other Christians are discovering and promoting the Anabaptist theology that our congregations have stewarded for five centuries.  But some find it disconcerting that these same people are then looked to as resources for our own renewal. Why can’t cradle Mennonites be the source of that renewal?

Well, we can, and we are. We have good seminary programs and our ranks include influential leaders and thinkers. Our publishing activities are robust for our relatively small size. Yet let’s confess that no one has a corner on any movement of the Spirit. Today, as in the 16th century, an Anabaptist understanding of the church and Christian discipleship is catching hold among a whole variety of people. This is due, in part, to Mennonite academics like John Howard Yoder and social activists like Vincent Harding who have shared their gifts with the world.

Stuart is one of the leaders in the growing Anabaptist Network in Britain. The network has roots in the teaching and presence of North American Mennonites in Britain in the last few decades (Alan and Eleanor Kreider and others)—but the network has taken a life of its own. Today it is composed of people—many of them influential scholars and church leaders—who have been smitten by an Anabaptist understanding of faith, even though they remain in their own denominations.

These books join a cluster of Herald Press titles that come from people who love Anabaptism and yet are grounded in other traditions. Keep an eye, for example, on our Challenge to the Church series of John Howard Yoder writings compiled by three editors, two of whom are Christian Reformed.

I find it refreshing when new perspectives and new energy come from groups that aren’t so encrusted with the religious traditions that we’ve inherited—precious and instructive as they are. Sometimes the new winds blow in from Britain. They often come from the newer churches of the global South, in the Mennonite World Conference.  They also waft in regularly from North American Christians looking for theological alternatives, for authentic New Testament faith, and even a new denominational “tribe” to belong to.  We are only enriched when we welcome them with open arms.

Learn more from excerpts from The Naked Anabaptist.