Ten Tons of books. That’s what I estimated were heading for the dumpster as we closed the warehouse of the former Mennonite Publishing Network (MPN) in Scottdale, PA,  in June of 2011. “What a waste,” I thought to myself, “I hope in the future we can do it differently.”

Today, with eBooks, Print on Demand, and audio downloads, MennoMedia is doing it differently.

EBooks are everywhere now. Over the past several years they have become the fastest growing segment of book revenues in North America. While many like to read digital books on dedicated devices, like a Nook or Kindle, the tablet computer is rapidly becoming the device of choice and will, I believe, make dedicated readers obsolete in the near future.

MennoMedia has recently had most of its backlist (older) titles converted to eBook formats, which are available at places like Amazon, Barnes & Noble and Kobo. Since last fall, every new book title from Herald Press has a digital format available concurrently with the print version. Before too long we hope to be able to sell eBooks directly through our own online store as well. While I am not a huge fan of digital books personally (I like the tactile experience of reading a book on paper) I can see how eBooks can be especially useful to people who travel, do research, or who simply don’t like stacks of books lying around. 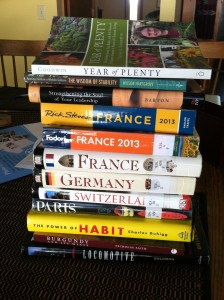 Print on Demand. It used to be that when you printed books, you had to calculate a print run in the thousands in order to get a decent unit price on books. Older books were a dilemma: how many more would we estimate to sell? What if we don’t sell all that we print? Shall we just let it go out of print? Do we risk printing 500 or 1,000? The ten tons we disposed of in Scottdale are a case in point. In the past decade, a new technology, Print on Demand (POD) has changed the decision-making. Now we can literally print one copy of a book at a time and not have any inventory at all. We are utilizing it for lower selling products as well as older books that have steady, but lower sales. It means that we also never have to let a book go out of print. As POD vendors such as Lightning Source open up facilities overseas we also see them being able to produce our books in places such as the UK, Germany, South Africa and Australia, meaning that we don’t have to ship books overseas, which is very expensive and time-consuming.

Audio downloads. I love listening to books, especially when I am driving long distances. Sometimes I borrow books on CD from the library (a useful, but dying technology,) but lately I have been downloading books directly to my iPhone via Audible. Two of our recent books, Laughter is Sacred Space, by Ted Swartz and Making Friends Among the Taliban, by Jonathan Larson,  are now both available as audio books and we have made both available only as a downloadable version. Both authors are great speakers/performers and it was natural that we would produce audio books from each. These downloads, by the way, are available directly from MennoMedia’s online store.

See also video trailer for Making Friends among the Taliban, and Weaving Life documentary, and video for Laughter is Sacred Space.

New Yorker Cartoon above available as a poster.