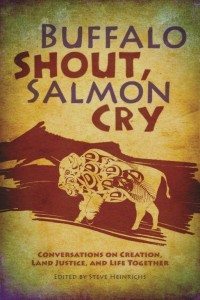 I work out of a home office in Winnipeg, Manitoba. The name of our city means Muddy Waters in the Cree language, a reference to the lake of the same name, sixty kilometers north of here.  Manitoba is also an aboriginal phrase, “Straits of the Great Spirit,” recalling a narrow strip of Lake Manitoba, our other large lake, where the water makes a gentle noise as it ripples over rocks. Early inhabitants took this to be the voice of God.

I think about these things more these days after working with a new book that is due to the printers this week: Buffalo Shout, Salmon Cry: Conversations on Creation, Land Justice, and Life Together. This collection of eighteen essays will disturb anyone who reads it, but in a deep-down good way. Written by indigenous and “settler” North Americans, it explores the ways these groups have interacted with each other, both historically and currently.

It’s not usually a pretty picture. Land has been stolen. Cultures have been decimated. The sacred earth has been, and continues to be, overtaken by personal and corporate interests. Our First Nations communities experience brokenness as a result. The church, sadly, has been an accomplice in the colonization of this continent. This book names and showcases guilt and brokenness.

That’s the disturbing part. But Buffalo Shout is also about hope. That editor Steve Heinrichs was able to assemble writers from both settler and indigenous communities so that they talk together is, in itself, a promising achievement.  Each essay is bookended with short creative poems, prayers, or reflections by someone from the other heritage. Each writer shows enormous respect for the others’ voices, even if they may not agree on everything or fully understand the complex issues.

The voices in this book are as diverse as you can imagine. In something of a bold move for Herald Press, we are allowing voices that challenge our own cherished assumptions as Christians and as Anabaptists—recognizing that we must listen to them if the healing we wish for is ever to occur. For at least one aboriginal essayist, Christianity itself was discredited in the way his people were colonized—while others writers in the book  have valued Christian faith even as they recover their own heritage.

As I did the editorial work on this astounding collection, I could swivel my chair and view the dome of our provincial legislative building where politicians continue to make decisions that affect our First Nations community.

And below my window I see the garden where I till the same land that a Scott, James E. Lang, bought in 1863, more than a decade before Treaty One came into effect, governing how this land would be used—land that the first peoples never thought could be “owned.” After the treaty was signed, as the new city of Winnipeg began encroaching on his farm, Lang moved to southern Manitoba to the Rousseau River area. Here, more cheap land was available because the first inhabitants were being moved onto reserves.

When I till our garden—I wonder how to come to terms, personally, with this history. Buffalo Shout, Salmon Cry gets me thinking and, I hope, acting. I look forward to having it in my hands next month.

And just for good measure, see what others are saying about the book:

“Superb! For centuries our misunderstandings and conflicts have accumulated…. But in this book the issues are opened, offering information and insights and resolutions that amaze our usual thinking. Read it carefully; with a prayer for understanding.”
—Rudy Wiebe, novelist and co-author with Yvonne Johnson of Stolen Life: The Journey of a Cree Woman

“This invaluable collection calls us to decolonize theology and interrogate how the logics of settler colonialism have infused Christianity. At the same time, it refuses the temptation to replace one metanarrative with another.”
—Andrea Smith, author of Native Americans and the Christian Right

“Steve Heinrichs has edited a courageous and urgent book. The voices that speak here sound from outside the theo-political, social-economic domination system of our society. The book is an invitation to rethink both policy and attitude. Attention must be paid!”—Walter Brueggemann, theologian, Columbia Theological Seminary

Buffalo Shout, Salmon Cry offers precisely the sort of dialogue essential to the establishment at long last of respectful relations between peoples in this hemisphere. No less are such conversations necessary to the forging of a sustainable relationship between humans and the rest of creation. Steve Heinrichs is to be commended for having assembled this book.”
—Ward Churchill, author of Struggle for the Land

“Mind blowing. Once you read the book, you will never look at the world, or your place within it, the same way again. The voices within these covers offer sobering and challenging truths. I am uncomfortably humbled.”
—Christine J. Sabas, attorney and advocate with Christian Peacemaker Teams 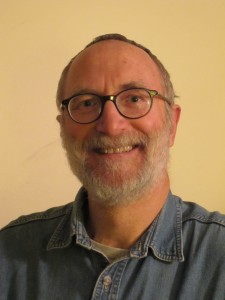