We had a much-needed fun break recently from the intense work of getting ready for the every-other-year massive marathon of the Mennonite Church USA Convention July 1-6, 2013 (intensified by MennoMedia’s fiscal year-end madness, coming June 30), in addition to our regular work. 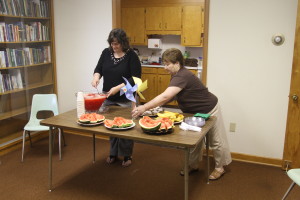 So we celebrated the upcoming wedding of Evan McCarthy, whom many of you have met through this blog, or on the phone, or in emails, or somewhere else. (See Evan’s most recent blog post on struggling through inventory.) 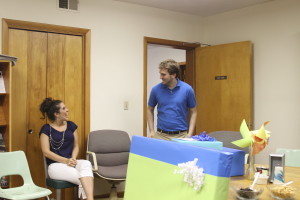 We had a surprise shower! Heather, the bride-to-be, also surprised Evan in our lunch/break room.

It was a bittersweet occasion, though, because Evan left employment with MennoMedia as of June 18 to go to grad school. We will miss him. 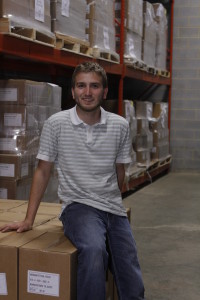 He joined us when he was just a rising senior at Eastern Mennonite University the summer of 2011; he was hired one day, and by early the next morning left for a trip with two others to Scottdale, Pa. (the former headquarters of the Mennonite Publishing Network arm of the merger with Third Way Media that formed MennoMedia in July 2011).

They went to Scottdale to check out mail room equipment and gauge how big of move we were all getting ourselves into. 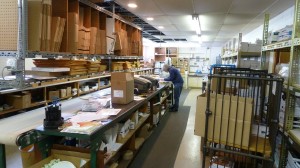 Mailroom equipment was moved and installed in the Harrisonburg shipping department.

Evan worked full time that summer, and part time while he finished his senior year as a business major at EMU. Then Evan began working full time right after graduation. 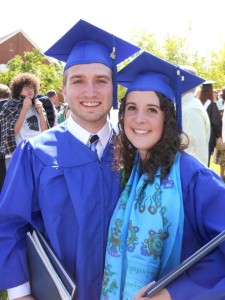 Evan and Heather at EMU graduation, 2012.

He had some great promotional ideas, as he helped to launch Mennonite Girls Can Cook Celebrations through Facebook giveaways.

Evan also has a great gift for numbers, or metrics, which people seem to like to call certain kinds of measurements these days.

He helped launch this blog—a task he enjoyed because it was a “diversion” from Amazon. 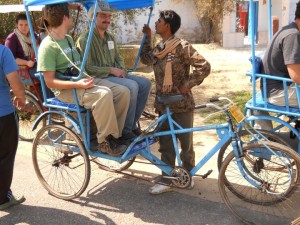 He also often entertained us at lunch with wild tales of the latest Bollywood movie he had watched. Both he and Heather spent their EMU Cross Cultural term in India, which they loved—and where they also grew to love each other.

A wedding is a merger of another kind with its own challenges. But with a shower of good wishes and a few gifts to start off their humble household (with Evan being a “poor grad student” at Virginia Tech and Heather an elementary school teacher looking for a teaching job in that area)—we know they’ll persevere as they go off into the sunset together. 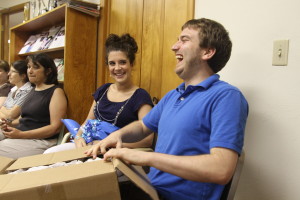 In a “goodbye” email he wrote to staff, “Working at MennoMedia and getting to work with each and every person here has been an incredible experience, and I feel very blessed to have had this opportunity. I’m definitely going to be thinking of you every time I see a Herald Press title on our bookshelves. Please feel free to keep in touch or contact me with any questions about anything I may have left half finished (my inbox is currently over 3,000).” 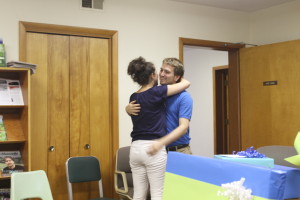 Do you have any words of advice for the young newlyweds? He’ll still be following this blog!