Wild. Wonderful. Scary. Satisfying. These are just a few of the words I can summon to describe my career as an editor with Mennonite publishing. This week, after sixteen years, I’m moving on to fulfill a long dream of full-time freelancing. I’m already missing my job, even though my end date is still a few days away.

But wait, was it a single job and a single employer, or several? For those who have followed  MennoMedia through denominational and ministry mergers, industry transformations, and the ups and downs in the economy, it all seems rather multi-threaded. The following paragraphs may look like a swan song from one of the “veterans” of the current staff, but in many ways, it is also a capsule version of recent MennoMedia history.

Back in 1997, when my family moved from Edmonton, Alberta, to Newton, Kansas, I was hired to be editorial director at Faith & Life Press, (FLP) an extension of the Commission on Education of the General Conference Mennonite Church. Already at that time, we were copublishing Sunday school curriculum, hymn books, and leadership resources with Mennonite Publishing House in Scottdale, Pennsylvania, our counterpart in the Mennonite Church. The two denominations were moving toward a merger that would result in Mennonite Church Canada and Mennonite Church USA. 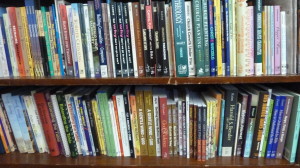 In 2001 I was invited to move north to Winnipeg to establish more of a publishing presence in Canada. By now, my employer was technically Mennonite Publishing House, the placeholder name that we held after the merger. But even as I settled into an office at Mennonite Church Canada, the publishing operation was teetering under a huge debt crisis and an urgent need to restructure. No need to go into the gory details of the staff cuts and survivor guilt of those days. One of the upshots in 2003, however, was our new name, Mennonite Publishing Network, which served us until two years ago, when MPN merged with Third Way Media to become MennoMedia.

Through it all, my work has also shifted a few times. Just a few highlights:

And our way of working has shifted. In 1997, social media was almost unheard of; now we use Facebook. In 1997, publishing staff were in two offices in Kansas and Pennsylvania, with a distribution centre in Ontario. Today, we‘re much more dispersed. Internet-based conference calling has replaced many face-to-face meetings. Electronic uploads have replaced paper transfers through regular mail. For five years, I have worked out of my home. Our periodicals and curriculum pieces are mostly edited by contract editors working in home offices around the continent.

In 1997, we still counted on churches to buy our products because we were the denominational publisher; today we must cultivate our relationships with congregations more than ever, and we share our resources beyond our denomination. Many of the books I have worked with have come out of a growing interest in Anabaptism among non-Mennonites.

It has been a good ride. I take with me many good memories of collaboration with writers, contract editors and designers, and customers throughout the U.S. and Canada. I am grateful for the many wonderful colleagues who have mentored me and/or collaborated with me. I pay tribute to editorial and ministry colleagues for all they have taught me and for their friendship and wisdom:  Susan Janzen, Ken Hawkley, Abe Bergen, Eleanor Snyder, Cynthia Lincscheid, Levi Miller, Rose Stutzman, Richard Kauffman, Marlene Kropf, Ron Rempel, Russ Eanes, Josh Byler, Merrill Miller, Reuben Graham, Mary Ann Weber, Kathy Shantz, John Longhurst,  Jodi Hertzler, Melodie Davis, Amy Gingerich and others, both past and current.

Of my original colleagues in Newton, production manager Terry Graber and customer service director Alma Unrau remain to carry on the FLP memory. Alma, along with Debbie Cameron in Scottdale and Dorothy Hartman in Harrisonburg have all been topnotch, competent editorial assistants. Thanks also to staff at Mennonite Church Canada for being a sounding board for ideas—Dave Bergen, Arlyn Friesen-Epp, Elsie Rempel, and many others. There are simply too many to name—designers, marketers, administrators, board members—it takes a quite a village to run a denominational publisher.

I leave my blessing and well wishes with my successor Valerie Weaver-Zercher, an experienced editor and author from Mechanicsburg, Pennsylvania; it’s been fun to have four weeks of overlap.

My wishes and hopes for MennoMedia: Stay cutting edge and prophetic, both in the world at large and in the church, as a torchbearer of the Anabaptist vision. Strengthen the binational cords that bind MCUSA and MCCANADA together. Keep up the good momentum in establishing an Anabaptist presence in the publishing market.

But mostly now, thanks to God and to MennoMedia for a great 16 years! 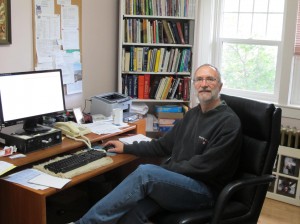 Byron Rempel-Burkholder and his wife Melita will travel in Ontario and England in October, then resume life in Winnipeg, Manitoba—Melita as a personal care home chaplain, and Byron as a freelance editor and writer.