Through years of freelancing and now working remotely as an editor at Herald Press, I’ve become accustomed to working in my basement office. It’s a great place to focus on editing projects, but it’s pretty utilitarian. There’s not a lot that one could call “beautiful” here in my basement lair, filled as it is with a simple desk, a computer, some files, a few bookshelves, and a printer. There’s even a toilet in one corner, which does little to enhance the aesthetic value of the space even as it lends new meaning to the term “multipurpose room.”

So it was an incredible treat when I got to spend the day with three artists recently, and to watch as they contemplated and created beauty. As you may know, Herald Press is revising and re-releasing Extending the Table, the global-foods cookbook that is the second in the World Community Cookbook series commissioned by Mennonite Central Committee. (See my blog posts about the revised edition here and here.) We’re adding some recipes, deleting others, and adding photographs of some of the dishes themselves and of people around the world interacting with food.

One lovely autumn Wednesday a few weeks ago, I traveled to the Mennonite Disaster Service headquarters in Lititz, Pennsylvania, to watch a photo shoot for the new edition of the cookbook. When I arrived, food stylist Cherise Harper was in the kitchen, preparing gado gado (p. 135) for photographing. Photographer Melissa Hess and Extending the Table designer Julie Kauffman were busy getting the lighting and arrangement of the dish and place setting just right. 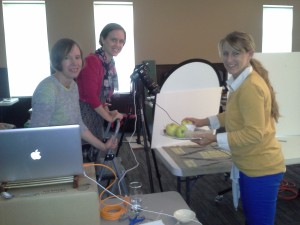 Cherise, Melissa, and Julie have spent eight days in September and October preparing dishes and photographing them for the new edition of the cookbook. The day that I visited, four recipes were on the docket: gado gado (Indonesian vegetable platter), nshima (African cornmeal porridge), punjena paprika (stuffed peppers from Croatia/Serbia), and fūl (Sudanese-style beans).

I didn’t think I was hungry when I arrived at the MDS headquarters, but the smells emanating from the MDS kitchen soon convinced me otherwise. Watching Cherise arrange the lightly steamed green beans and carrots and other vegetables on the platter as she prepared gado gado, and smelling the peanut dip, and remembering how tasty the dish was when I ate it at some friends’ wedding reception, made me eager for them to finish their work on the dish so that we could, well, make sure it didn’t go to waste. Apparently throughout the eight days of photo shoots, hungry MDS staff members would occasionally wander in, just to “see” how things were going.

But I soon learned that food styling and photography doesn’t mean whipping up a recipe, snapping a few shots from different angles, and then digging in. Cherise, Melissa, and Julie work deliberately and carefully, and with the singular approach of artists devoted to creating beauty. Melissa and Julie spent long moments wandering among tables filled with baskets and bowls and platters and textiles from many regions of the world that Julie had collected. Some of these items were on loan from Ten Thousand Villages; others she had brought from her own collection or the kitchens and dining rooms of friends. Melissa and Julie wandered about the room in what seemed to me to be an almost meditative state, fingering napkins, holding up bowls and spoons together, consulting quietly together on what might be the perfect pairing for the dish that Cherise was preparing in the kitchen. 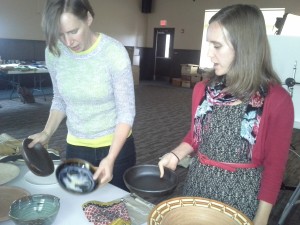 Designer Julie Kauffman and photographer Melissa Hess ponder which dishes and fabrics to use for a particular dish.

After they had decided on the combination they wanted, they would take some mock-up shots with some substitute food items. I was a little bewildered when I first watched them carefully photograph a plate of uncooked rice noodles and limes, so was relieved to find out that these things were simply placeholders while they got the lighting and angles right.

Meanwhile, Cherise was over in the kitchen, carefully preparing and arranging the food she’d just cooked, paying special attention to the garnishes and appearance of the ingredients. Her deliberate, careful stirring and sautéing and steaming, there among her oils and herbs and bags of flours, bore little resemblance to whatever it is that I do in my kitchen, and the care with which she arranged each final dish was truly stunning. 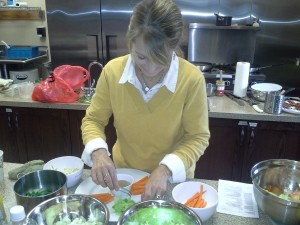 Then, when the dish was finally plated and carried over to the table under the eye of the camera, the three of them would make final tweaks to the angle of the dish or the lay of the parsley leaf, and then Melissa would begin taking photographs. 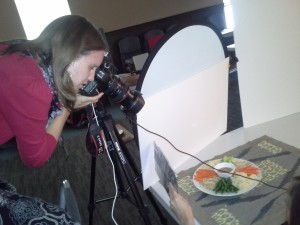 The photos would appear on her computer screen, and once again I was reminded that I was in the presence of three professional artists, committed to their craft and to the beauty of food. Had any of them asked me, I would have said that any of the first three or four photographs would work just fine for the cookbook—I mean, all of them were absolutely lovely—and suggested that maybe now we could eat? But I learned to keep my mouth shut and just watch as they consulted together quietly, pointed out to each other shadows or distracting patterns or things that weren’t quite right in this photo or that one, and then fixed whatever it was I wasn’t seeing.

Finally, after Melissa had taken what seemed to me to be countless shots, they’d agree that at least one of them should work, at least with some touch-ups from Julie later on. The moment I’d been waiting for had finally come: the dish was carried back to the kitchen counter, ready to be eaten. I mean, who could resist this? 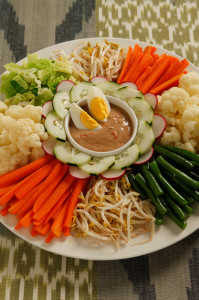 One of the finished shots of gado gado.

We hovered around the gado gado for a while, dipping the crisp vegetables into the peanut sauce, but Melissa and Cherise and Julie soon moved on to preparing for the next dish. I tried to look busy and not too eager to taste the next dishes on the roster. And I kept slipping back to the kitchen for just one more bite.

The revised edition of the Extending the Table cookbook will look different from the first edition, thanks to photographs like these. But it still strives to help Canadian and U.S. cooks prepare food in ways that are mindful of the rich culinary traditions and strong Christian faith of our brothers and sisters around the globe. Extending the Table is much more than a collection of delicious recipes, interesting stories and prayers, and pretty photographs; it is a handbook, of sorts, for living as a globally minded Christian, and I feel incredibly privileged to be a part of bringing this new edition to birth.

Thanks to the work of Julie, Melissa, and Cherise, it is also a work of art.

Valerie Weaver-Zercher is managing editor of trade books for Herald Press. The revised version of Extending the Table will be available in May 2014. If you just can’t wait for that, we’re happy to sell you the current edition here.