December at the Eby house means watching Dove Tales. While we watch this DVD at other times of year, it gets played most often in December. Ever since we bought Dove Tales, the day we decorate the Christmas tree always includes the retelling of the Christmas story, compliments of the Peanuts gang and Ted Swartz, Lee Eshleman and Ingrid DeSanctis. (That’s high praise, considering my kids were seven-years-old and ten-years-old when we first bought the DVD.)

We’ve watched Dove Tales so often that we chime in on certain lines such as:

My favorite scene is where the very pregnant Mary tells Joseph three things he can do to keep their marriage together. (I won’t spoil it by saying more.) My favorite line happens in the scene where Joseph and Mary meet after several months apart. Joseph shares that he still loves her, but no response. He asks, “Can you help me out here, Mary?” Mary pauses then replies, “I’m pondering.” My kids, who grew up with the New International Version of the Bible, and not the King James Version, will never think that line is as funny as I do.

Elizabeth, who is now thirteen years old, had a hard time picking one favorite scene or line. “I always liked the more physical scenes like Zachariah and Elizabeth communicating through pantomime and Gabriel and Joseph fighting in Joseph’s dream. For the first couple of years, I was confused by Gabriel’s line at the end of that scene when he says ‘Marry her.’ I kept thinking he was saying, “Mary her.’ Now when that part comes, it makes me smile, just because I get it now.

I also asked sixteen-year-old Nathanael why he still enjoys watching Dove Tales. “I like the way the actors become the characters they are portraying. They are very expressive in how they speak and act. Each character is unique and recognizable. It’s fun that Nigel is in it as the innkeeper because I like him in other sketches. Best of all, it’s clean humor about stuff that really matters—not just punch lines.”

My husband, Rick, added, “It’s a fresh but authentic take on the Christmas story and about people with real human frailties. We tend to forget that the characters in Bible stories didn’t know what was going to happen or if things would work out. Dove Tales is a great reminder of this.”

That’s the beauty of Dove Tales. So many layers and each one enjoyable. There are the pratfalls and the chance to make animal sounds that even the youngest child can enjoy. There are the familiar scenarios where we laugh when we recognize ourselves or people we know well. There are the odd, quirky characters who are simply fun to watch.

Dove Tales is also about relationships. The husband, who wants to say the right things to his wife but can’t seem to manage it, and the wife who loves him anyway. The brother and sister shepherds who are content with whatever comes their way, from foot rot to a message from angels. Gabriel and “the lesser cherubim” who are simply excited to be part of the God story, even when their plan doesn’t go as planned.

And most of all, Dove Tales is about how our God—who wanted so much to have a closer relationship with us—chose the surprising solution of sending a small baby to a humble couple to raise. This is a story that will definitely go “forever on.” 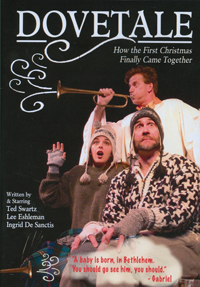 If you don’t have your own copy, you may want to think about making it a gift for the whole family. You can also learn more about the current Ted & Company Theaterworks here.

For Ted’s memoir check out Laughter is Sacred Space.