If my brother had not lost his harmonica, we might have missed the whole thing.

It was Christmas Eve, 1968, and I was 11. My oldest brother, a Bob Dylan aficionado, had picked up a harmonica at college that fall and was learning to play.  My family, Episcopalians, headed out to midnight Mass that evening and my brother had brought along this harmonica, though none of us knew it. This was always my favorite church service:  its lateness combined with majesty and sense of mystery, was the culmination of the entire year. Afterwards, we left the church and headed for home to enjoy a family celebration: opening gifts from under the tree, while we enjoyed cookies and hot coffee.

Except that when we got home, my brother declared that his harmonica was missing; the car was searched as was the house. He was sure he had taken it—and he and my other brother quickly drove back to the church to see if they could find it. We would have to wait another half hour or more to start our celebration.

I sat down with my parents and sister to wait for them. We switched on the TV—and became transfixed. The astronauts of Apollo 8 were at that moment orbiting the moon, the first humans to ever do so and were broadcasting live. They sent back a message to the entire planet, readings from the first 10 verses of the Bible, the book of Genesis, “In the beginning God created the heavens and the earth…” 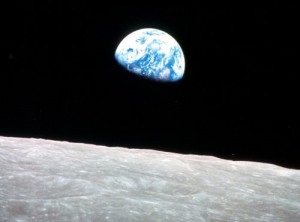 They had been the first humans to observe what became known as “earthrise” as they orbited the moon and that vision gave the book of Genesis a whole new meaning.

That Christmas Even broadcast was, until its time the most-watched in history.  1968 had been a difficult year: the war raged in Vietnam; we had political assassinations and political unrest at home, student demonstrations and race riots; the Soviets had crushed the uprising in Czechoslovakia known as the “Prague Spring.” At that moment, on Christmas Eve, much of our planet was watching—and we were seeing ourselves anew. It was one of those moments in which we could sense we were part of a greater unity, a greater purpose that might overcome all our difficulties. The astronauts concluded their scripture reading with a greeting, “And from the crew of Apollo 8, we close with good night, good luck, a Merry Christmas and God bless all of you—all of you on the good Earth.” That moment for me, an 11 year old, was more than magical: it was transcendent.

Christmas is a time when we celebrate incarnation, of God becoming flesh. We celebrate the Transcendent One becoming Immanent—close to us, within our sphere, literally our earthly sphere. And at the end of that difficult year of 1968, I think we were all able to see, if we were watching, our planet, the sphere on which we cling to life, as perhaps God can see it, small, beautiful, rich, a place worth coming to. For me, it gave a whole new meaning to Christmas.

And I might not have experienced that moment it if my brother had not lost his harmonica.

May you know, celebrate and worship the transcendent God, who became flesh for us all. Merry Christmas and a Happy New Year!

And, oh yes, the harmonica was found—in a snowbank.