The day dawned crisp and bright, the author stood at the ready with pen in hand, and the books had been carefully arranged in two neat stacks. 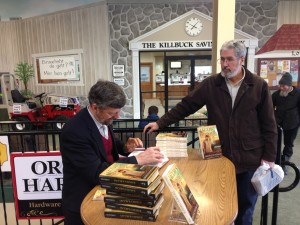 It was show time! Or at least the book-signing equivalent of show time. 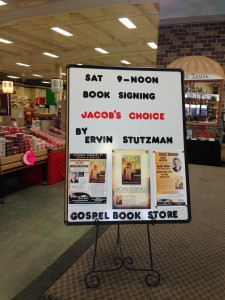 I had the pleasure of attending the national launch of Jacob’s Choice, a new novel by Ervin R. Stutzman, at Gospel Book Store on Saturday, Feb. 8, in Berlin, Ohio. Eli (“Small”) and Vesta Hochstetler, owners of the store, know how to work on the advance publicity and certainly did a fine job of letting the media and their customers know about this event. 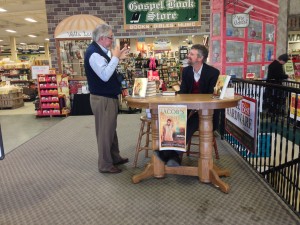 When I arrived shortly after 9 a.m., Ervin noted that he had already signed a few books for eager customers! (The signing itself was from 9 to noon.) There was a steady crowd all morning, with Ervin graciously signing books for customers and talking about family connections. 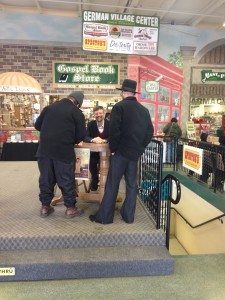 You see, Jacob’s Choice is historical fiction, based on the real-life story of his Amish ancestor Jacob Hochstetler, who lived peacefully with his Amish family at the foot of the Blue Mountains of Pennsylvania. His beliefs were severely tested one night in September 1757, after a raid on the Amish settlement near Northkill Creek left his wife, daughter, and a son dead, and their home in ashes. Jacob and two teenage sons were captured and taken to different Lenapi Indian villages, unsure of their fate. After a long, hard winter in the Lenapi village, Jacob made a harrowing escape downriver and returned home to Northkill, only to find all that he had known and loved were gone.

As I talked with Eli Hochstetler on Saturday morning, he noted several reasons why hosting this launch event at their bookstore made sense. First, Eli and Vesta are also descendants of Jacob Hochstetler and are involved in the Hochstetler reunions that happen every five years. They also hold the copyright for the Jacob Hochstetler family history books, making their store and business the go-to place for Hochstetler genealogical records. And let’s not forgot that hosting an event like this is just plain fun as well. Eli noted that their customers appreciate knowing that national launches are happening at Gospel Book Store, their locally owned and operated store. It makes customers feel connected to larger events, he said. 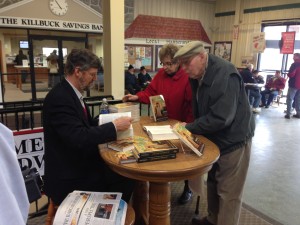 In addition, we at Herald Press had wondered last fall if we should create an expanded edition of the novel. We thought some customers might want to have additional historical background, maps and photographs of the area, family tree charts, and more. In discerning whether or not there would be a market for such an edition, one of the people we talked to was Vesta. She noted then that her customers would very much appreciate having this additional detail—and would pay more to have it. Vesta was right, and her hunch was borne out in sales on Saturday morning as well—with customers by far preferring the hardcover expanded edition to the novel itself in paperback form.

Thank you, Ervin, for coming to Ohio for this event and thank you, Eli and Vesta, for being such warm and gracious hosts! 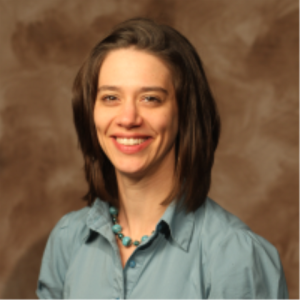