Ben and Heather Kulp’s 40-day Lent journey to cook exclusively from More-with-Less Cookbook. *(Be sure to read to the end for a special invitation to comment and have your name put in a drawing for a free copy of More-With-Less.)

By Ben and Heather Kulp

While visiting a chef friend in San Francisco last year, we learned a new term: “fast fresh.” The term demarcates those restaurants that are not the traditional burger-and-fries fast food joints, but still offer customers counter service and cheaper food than a sit-down restaurant (think Chipotle, Freshii, Chop’t, etc.). The “fast” is supposed to appeal to those who don’t have a lot of time for lunch during the day, while the “fresh” is supposed to appeal to those who want healthier food options than meal-deals and 99 cent menus can provide. Usually, the target market for fast fresh is young and middle-aged health-conscious professionals—just like us. And we have fallen into that trap again and again, especially when we forget to bring lunch to work or are out running errands during a meal hour.

But what fast fresh and traditional fast food share is the very thing that makes them both tempting and flawed: they are not actually faster than eating food you cook yourself. The draw of such food is in the idea that you don’t have to “work” to get it. Someone else is, very literally, providing for you. This triggers feelings of safety and comfort, even if only for a few moments when you sit down and get exactly what you want.

So what happened this week without the option to engage in this kind of emotional convenience eating?

Last week, we discussed shopping our pantry, and this week, those skills came in handy. We had one evening in particular where nothing was planned for dinner, yet we needed to eat quickly. Thankfully, More-with-Less gives us a tool—the “TS” designation—that indicates recipes that can be made in 30 minutes. Instead of ordering in or grabbing something on the way to the next meeting, Ben proposed making breakfast for dinner (“brinner”). 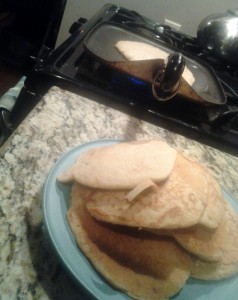 Fifteen minutes later (and with plenty of time before the next activity), we had a hot plate of Whole Wheat Buttermilk Pancakes (p. 73) and a side of high-protein eggs and cheese. It was faster and cheaper than takeout and created space for us to have a conversation over the dinner table.

Speaking of dinner table conversations, home-cooked convenience foods allowed us to have more conversations about More-with-Less itself. We traveled to visit Ben’s mother in Vermont for a few days—our son’s first trip out of town. We had planned poorly for our four-hour trip to her house and hadn’t eaten a proper lunch. Normally, we would have stopped to grab fast food; instead, we were surprised with a snack along the way. We stopped briefly at Ben’s sister and brother-in-law’s house to nurse and catch up. Instead of buying a box of our favorite chocolates as a host gift, we made the Whole Wheat Orange Bread (p. 80). 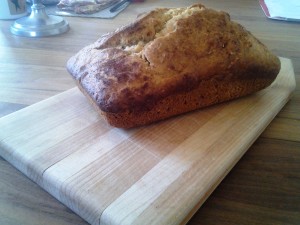 Even though it was for them, they immediately sliced it and shared it while we talked. They discussed how they were transitioning to a simpler, “cleaner” diet and were using cookbooks like More-with-Less for inspiration.

We when arrived at Ben’s mother’s home, she had a steaming bowl of Corn and Bean Chowder (p. 202) made for us. 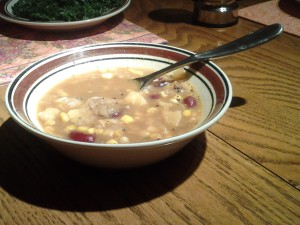 As we ate, she described the first time she heard about More-with-Less. She was at a farmworkers gathering in Detroit in the 1970s and a Catholic who heard she was a Mennonite approached her. “Have you heard of that great cookbook your people published? It’s revolutionary.”

Then Ben’s mother brought out her battered, stained 25-year-old copy of the cookbook. 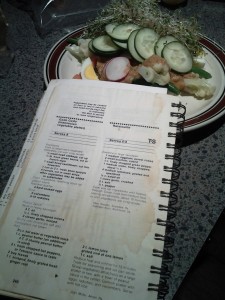 We flipped through it, understanding how many stories must be contained in those recipes. We can’t wait to hear more. Then she made us the truly fast and fresh Indonesian Gado Gado (240) that night. 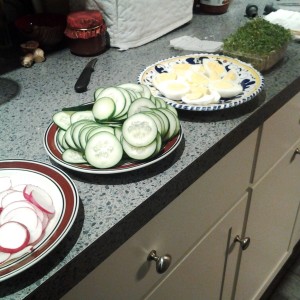 This week was more challenging than the last, as we experienced some of the circumstances under which people make choices that are more “superconvenient,” as Doris Longacre says and less “responsible, nutritious” (p. 47). Thankfully, she provides some recommendations for how to make the more responsible choices: alternate cooking with others in the household; live in close community with others who can share meals; simplify the menu; plan menus in advance (this will be our challenge next week!); and buy/cook in larger quantities that can be used over time (p. 47-48). So, though less initial thought may go into securing “superconvenient” food, we found out this week that we are more emotionally and socially satisfied than if we had gone out for dinner or purchased (one of Ben’s favorite) frozen pizza.  We look forward to updating you next week on how our week of food preparation and hosting friends is going.

* What recipe that is not in More-with-Less do you use regularly that helps you cook more with less? Add your comment and your name will be added to a random drawing for a free copy of More-with-Less. Please comment before our next post on March 27, 4 p.m. ET. Deadline! 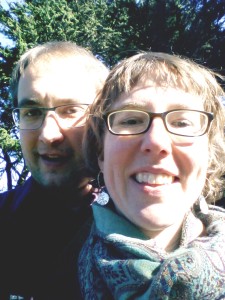