I was at Ohio Mennonite Conference’s annual assembly at Bluffton University in early March and had the pleasure of seeing Ted Swartz perform “Laughter is Sacred Space” before an audience of more than 300 people – in a space that maybe seemed not so sacred. The venue was an old gym with bleacher seating extending to the edge of a worn basketball court – not exactly Carnegie Hall. Yet, Ted was engaging and the audience was enthralled. This was my second time seeing Ted perform “Laughter” and it was just as funny and poignant the second time as it was the first time.

I’m sure many of you have seen Ted perform, perhaps as one-half of “Ted and Lee,” or more recently as the lead actor of Ted and Company TheatreWorks. He and Lee were perhaps best known for their roles in Fish Eyes which debuted in 1994*. In it they portray Peter and Andrew, disciples and brothers who walked with Jesus in his final days on Earth. However, when Lee took his own life in May of 2007 Ted lost his business partner and best friend. “Laughter is Sacred Space,” the show and book, tells the story of Ted’s struggle with that devastating loss and his faith journey through the mist of overwhelming grief. In this one-man play Ted recounts the first time he met and worked with Lee and of their growing friendship and business partnership. Though props, photos, and reflections, Ted describes how he and Lee honed each other’s skills and created a drama company capable of bringing fresh insights into biblical passages while providing them both with a respectable living as theater professionals.

Ted will be back in Ohio to perform “Laughter” again, this time at Central Mennonite Church, on Friday April 4 at 7 pm. For information about this and other upcoming performances check out Ted’s web site at: Ted and Company TheaterWorks.

For those of you who have not been able to catch a live performance of “Laughter is Sacred Space,” I recommend reading Ted’s book by the same name, available in two different covers: 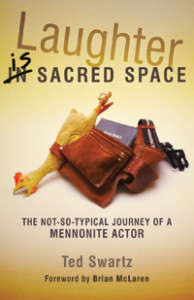 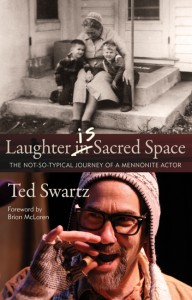 In September 2012, Ted paired a live performance of “Laughter is Sacred Space,” to a sold out crowd at Court Square Theater in Harrisonburg, VA where Ted and his wife Sue live, with the launch of the book. Since then more than 1600 copies of the hardcover book have been sold, along with nearly 750 sales of the electronic version. Both the book and audio download, which is performed by Ted, are available through MennoMedia’s store.

This was my second time at Ohio Mennonite Conference’s Annual Assembly and both this year and last Eliot and Seth Nofziger, two brothers from Ohio who perform original skits under the name The Living Script, have put on dramas which introduce a scripture passage for further reflection by the delegates. These men are young, Eliot is a student at Bluffton. Ted has been doing drama in church settings for more than 37 years. Seth and Eliot’s work seems to have been inspired by Ted and Lee in that both teams use humor to bring a fresh interpretation to scripture. It’s good to see the vision of one generation pass on to the next. It’s even better to see how both The Living Script and Ted and Company have been used of the Holy Spirit to cause audiences to take a fresh look at familiar Bible stories and laugh in the process.

Have you seen Ted or the Nofzinger brothers perform? What did you think?
Have you read Ted’s book? Which parts did you connect most deeply with?

*For those in Virginia: Celebrate the 20 year anniversary of Fish Eyes, an unforgettable and funny series of detours through the Gospels, with Ted Swartz as Peter and Jason Hildebrand as Andrew. Fish Eyes will be at Court Square Theater in Harrisonburg, Va., on April 10, 11, 12 at 7:30 p.m. and April 13 at 3 p.m. Tickets are $15 in advance, $18 at the door. Seniors, students and groups (10+) $12 in advance, $15 at the door. More information here.