Why would a small publisher like Herald Press be enthusiastic when an author who publishes with another bigger Christian publisher comes to town?

Well, because it is always interesting to see how other authors roll. And to see what makes a successful Christian author in this time. And you know, to see, if behind the name there is a nice person who all of a sudden worries about what her socks look like in front of an audience. 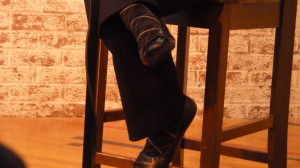 “Oh I forgot what socks I had on,” she said grabbing for her gray gargoyle socks while perching on a stool in the Common Grounds Coffee House on the Eastern Mennonite University campus here last week. “But you all are Mennonites. You won’t judge me by my socks.”

She was speaking in her smallest and most intimate venue of the day, a class in “Anabaptist Biblical Perspectives” at EMU (which is just up the hill from MennoMedia in Harrisonburg).

The warm socks were perfect for a chilly March day. 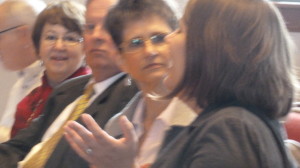 But when your blog gets over a quarter of a million visits each month, 300 or more comments on a single post, plus 29,000 followers on Facebook and 41,000 on Twitter, and one of your books titled A Year of Biblical Womanhood: How a Liberated Woman found Herself Sitting on Her roof, Covering Her Head, and Calling Her Husband “Master” (Thomas Nelson, 2012) has been on the New York Times Bestseller list, you can wear whatever you want. When your book got you on the Today Show, the BBC, NPR (and many more), and you’ve been named to Christianity Today’s “50 Women to Watch” list, you likely have other publishers standing in line to take you on. 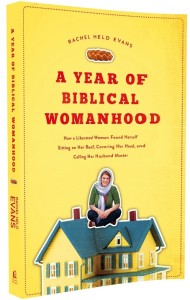 This author is gutsy enough to tell a university chapel of mostly students and faculty to “just keep the church weird” as the answer to why her generation is leaving the church. “Just do what you need to do,” Rachel implored, and not worry about getting a cooler band or a barista-type coffee shop in your foyer as some megachurches have.

By weird she was referring partly to rituals like communion and baptism, which can be strange if you haven’t grown up with them. This hit her powerfully one weekend when she was speaking to a group of 600 middle and high school youth. She had some angst especially about how to relate to adolescents. 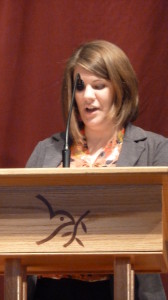 She joked to the EMU chapel audience that one of the chapters in her humor-filled biblical womanhood book takes on the Old Testament Scriptures that talk about a woman being unclean during her monthly period, and figured she wouldn’t be focusing on THAT with that audience. She earnestly prayed about how she could do “right by these kids,” and connect on their terms. Then during a closing communion service for the conference, when some 600 kids filed by her as she helped to serve them communion, she said to each one the words of institution: “This is Christ’s body, broken for you.”

As the kids shuffled by her, some not looking at her at all, some with tears streaming down their cheeks, some giggling with their friends, some who didn’t seem to have any friends, some in designer jeans, some still in pjs, some who were athletes, class clowns, in braces, and one (knowing her huge affinity for Alabama State football mumbling the rally cry “Roll Tide” as he went by)—she realized there wasn’t anything further she had to do than what Jesus had already done in sacrificing himself. Rachel said after repeating “This is Christ’s body, broken for you about 600 times” she knew that she had ministered God’s grace for them, and while some of them would get it and others would likely not, “God’s grace is enough. We don’t have to try so hard to ‘make church relevant.’ Just do what you need to do.”

In Rachel’s world, that means being willing and comfortable to listen to and be with the questions that most of us run into somewhere in our lives, especially if we grew up in a Christian home and something happens in the world or our lives that causes us to question all that we were taught.

For Rachel two such moments stand out. Though her parents were strong evangelicals, (in a church which she says was “very similar to Southern Baptist where no woman was allowed to teach men” and male and female roles were very distinct), her parents were not afraid of her questions and always stood by her. When she struggled with why she had such bad eczema as a teen, she cried in frustration to her father, “Why did God let this happen to me?” He responded, “I don’t know, but I do know that God loves you.”

But the huge game changer came after September 11, 2001, when she was a junior at a conservative Christian college. The U.S. had just invaded Afghanistan and on campus they watched a documentary, “Behind the Veil,” which addressed the atrocities of the Taliban and showed a woman wearing a burqa who was accused of adultery and finally executed. In discussion afterwards, her classmates felt the woman would have gone to hell because she was, after all, a Muslim, and Rachel couldn’t imagine a loving and all powerful God who could possibly let that happen. “That started unraveling my faith and led me to question and deal with denominational and religious differences.”

I’ve followed Rachel’s blog off and on for the last couple years but had never purchased or read the “biblical womanhood” book until her visit. That’s of course one of the reasons authors need and want to get out, because it helps people get around to actually reading a book they’ve seen or heard about on YouTube or the Today show or NPR. So I’m impressed that her book, like her blog, while wildly funny and full of hyperbole in places, contains so much straight-up analysis and description of a long string of biblical women that you think the writer has to at least have a seminary degree to write so knowledgeably. Her book makes an excellent companion piece to the small study piece MennoMedia published with Mennonite Women USA and Canada, Courageous Women of the Bible by Linda Gehman Peachey. 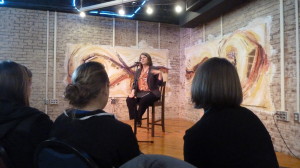 So in that smaller classroom venue, I got up the nerve to ask a question that one of my colleagues asked which I framed as, “How are you getting named to these lists of influential persons but it doesn’t look like from your bio you have any seminary training other than your undergrad Christian college experience?”

Rachel kind of laughed and said “lots and lots of research” and admitted she majored in English literature in college. She always wanted to be a writer and author and has written for newspapers and magazine. On her blog there’s a picture of her in elementary school dressed up like an “author” for career day—her dream job.

Rachel went on to say she’s getting a following “because of the online community we’ve built” (and by we she means all of the people who comment, write guest blog posts or who she’s interviewed for the blog) where “people can have a conversation about the things they can’t maybe say in church. The Internet has given me a platform I wouldn’t otherwise have. Where in my home church I wouldn’t have been allowed to even take up the offering much less talk, or give my opinion on theological matters, online I can have a voice. Folks from the margins can have a voice. This is good news!”

Rachel has helped thousands of others struggling with their beliefs about God and the Bible go back to or stick with the church. When all is said and done, “We need a community. I need a community to sort of rein Rachel in a little bit,” she admitted.

Some of the media people who interviewed Rachel about her A Year of Biblical Womanhood did so because of the novelty of her stunt. That’s what it takes these days. But behind the fun and the stunts is a genuinely faithful and scholarly look at what the Bible really says—even the dark passages in books like Judges, which we may wish weren’t in there. And when Rachel gets backed into corners by interviewers who are non-church goers or atheist and ask questions like “So, you seem like a smart person. How can you still believe in God?” she answers by giving all her reasons and then finishes by saying “I’m willing to be wrong—that’s what makes this faith. I’m choosing to obey and follow Jesus in spite of doubts.”

By their fruits we may judge maybe, but not by their socks.

And that’s a little of how Rachel rolls.* 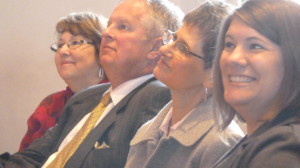 * When Rachel saw I was trying to snap a picture right before she got up to talk, she flashed a fun and cheesy smile.

Have you read A Year of Biblical Womanhood? What is your response?

What has had the biggest impact on your faith journey?