By Ben and Heather Kulp

Holy Week for Christians is here, and towards the end of any period of resolution it is a great to time to reflect on the experience. We kept true to our commitment to not go out to eat during the Lenten season.

It was a fulfilling experience to focus on inviting people in to our home to share hospitality and recipes from More with Less. We post this blog on our respective Facebook pages every week, and have been surprised by the responses sent to us from friends. Some of our friends are discovering More with Less for the first time, and one friend wrote to tell us that she was using the book to responsibly clean out her cupboard before moving to a new apartment. It has been heartwarming to receive e-mails and suggestions from people (strangers, even!) that read the blog. Grandpa Kulp, when visiting our little boy for the first time last week, brought his own copy of More with Less along for the trip. 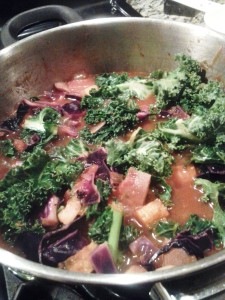 As we were planning our meals for this week, we flipped past an old favorite of ours, the West African Groundnut Stew (p. 172). We substituted tofu for the beef, and enjoyed the stew together as the weather (regretfully) turned cold and snowy again here in Boston. (Heather did not grow up hearing the term “wintry mix” on the weather forecast in Colorado, where “sleet” was the term used, but has now become familiar with the phrase after two New England winters under her belt). Ben has been eating the West African Groundnut stew since childhood, and Heather quickly welcomed the recipe in to our regular eating routine when we began dating. It’s a wonderful recipe to use to wait out the last few nights of chill and ice on the sidewalk, as well as a great way to focus on breathing and relaxation after putting an infant to bed after two hours of fussing. 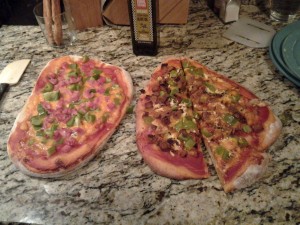 Last week we wrote about the temptation of eating out in a neighborhood that hosts many ethnic restaurants and wonderful ways to grab a fast and temporarily gratifying meal. A restaurant that Ben passes at the end of his daily run is the Regina Pizzeria. It is in the last half mile of the running route, and always boasts a wonderful aroma of buttery crust and melted cheese as Ben runs by. This past week, the waft of baking pizza was more than could be handled at the end of a long run, so pizza appeared on the dinner table that evening. Ben used the dough recipe to make homemade pizza dough (p. 142). To help clean out the fridge of all of the little containers that we (regretfully) let go bad more often than not (though less so now that we’ve been thinking about the Fragments), Ben made the pizza toppings from what could be scavenged. The pizza for Heather was vegetarian and featured left over roasted sweet potato cubes, pieces of a seitan loaf, and herbed Vermont goat cheese to top it off. Ben’s pizza was a little more utilitarian, and featured ham and green peppers, a Kulp family staple of pizza topping combinations for as long as can be remembered. A simple kale salad topped with stray vegetables from the fridge was an excellent way to balance out the meal.

The best resolutions change us gradually, and subtly, over a period of time. As we are ending the blog postings about our More with Less, we have been talking and meditating on how to extend the lessons learned towards the future. We have no doubt that we will occasionally stumble and grab Thai take out on a busy day, or not take the time to share a meal with each other at the end of a day. However, there have been subtle positive changes as well. We have begun discussing what we should make for dinner as opposed to what we should do for dinner.

We are moving to a new apartment in a month, and are happy that the landlord has agreed to let us turn a patch of crabgrass on the side of the house in to a garden. We are already planning where the cucumbers should go, and if there is enough sun to grow tomatoes. The local listings for CSA (Community Supported Agriculture) shares are spread throughout the house and organized by different pricing schemes, and pick up locations. With the announcement that there is a new edition of Extending The Table, as well as our annual tradition of using Simply In Season to appropriately use our summer vegetables,

Ben decided to go exploring in our current neighborhood. In addition to hosting many restaurants featuring food from all over the world, our neighborhood has a plethora of small grocery stores from different countries. One of the more prominent shops is the Hong Kong Supermarket, known to locals as “Super 88.” He wandered through Super 88 looking at the many different types of vegetables and tofu. He could only hazard a guess as to what most of the vegetables were, as they were described in a foreign language. He decided to pick up some bok choy on sale, as well as some tofu. That night, in celebration of our resolution coming to an end, Ben made Heather a new stir fry (“Asian style” stir fry being one of the staples in the Kulp household) using the bok choy, tofu, and purple sweet potatoes. The flavors were rounded out with walnuts, lemon juice, and cinnamon. The meal was inexpensive to make, and in conversation we realized we had borrowed the values from our More with Less resolution, and it had come through in the stir fry. (It’s also worth noting that Ben gleefully named the dish “Ben’s Bok Choy Surprise”). Instead of buying Thai or Chinese food on the way home, we went to a market a block away and made a much less expensive meal. 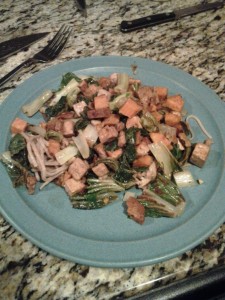 Heather and Ben would both like to thank everyone who has read our blog series and Melodie Davis for posting it for us each week. Moving forward, we hope to keep the values we have learned and renewed through our process and to instill them on our little boy.

Thank you for reading, 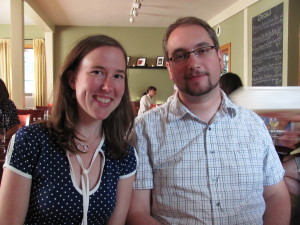 Ben and Heather hope to celebrate the successful completion of their Forty Days of More-with-Less at one of their favorite restaurants, Sonoma Station. (Photo from a year ago at Sonoma Station.)

Ben and Heather learned much through their 40 day experiment. What is the best or biggest thing you have learned, either through their blog posts, or on your own?

The Kulps mention Extending the Table, which is on pre-publication discount until April 30. 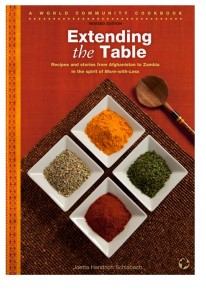