In early April I had the privilege of helping my Mom celebrate her 92nd birthday.

My wife, three brothers, and their spouses all gathered in Rhode Island, my home state, at a very nice Italian restaurant close to North Bay Manor, my mother’s assisted living facility, for a lovely evening together. Mom is doing remarkably well. She’s doing even better than she was two years ago when my brothers and I last gathered around her on her 90th birthday. About two years ago her medicines were adjusted and she seems to be much more alert. She doesn’t get out much anymore but still manages with a walker and a bit of help at the curbs and when getting in and out of a car. It was a joy to be with her, and the rest of my family, to celebrate this happy occasion.

In addition to the usual cake and candles, my brother Bill and I, with some help from our wives, wrote Mom a song to the tune of the 1920s jazz classic, “Has Anybody Seen My Gal?” However, rather than extolling her “five foot two, eyes of blue” we sang:

Born in England in ‘22
Sailed across the ocean blue
Now she’s almost 92
Has anybody seen my Mom?

Married George in World War II
Had four boys, two by two
Now she’s almost 92
Has anybody seen my Mom?

Loves her family through and through
All the boys and in-laws, too
Her apartment has a view
Has anybody seen my Mom?

Now she eats off a menu
Breakfast, lunch and supper too
There’s almost naught for her to do
Has anybody seen my Mom?

At North Bay a big to-do
When they go in search of you
She must be hiding in the loo.*
Has anybody seen my Mom?

Has anybody seen my Mom?

*In England a bathroom or water closet is sometimes called a “loo.”

Reflecting on Mom’s long life, I would say it has been well lived.

Herald Press author Dr. Glen Miller, in his new book Living Thoughtfully, Dying Well, challenges us to reflect on our own lives and make preparations for a “good death.” By that he means a death that comes while resting comfortably at home, surrounded by family and loved ones, not while lying in a hospital bed surrounded by machines with tubes coming out your nose. His premise is that everyone deserves a good death and that takes planning. The book contains many personal reflections including a heart attack which nearly killed him while he was giving a Power Point presentation to a group of clergy and medical professionals, about the high cost of health care in America. 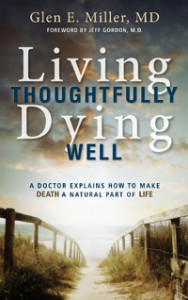 In addition to providing the expected check list of needed things, such as a living will and an advanced medical directive, Dr. Miller recounts stories where the patient’s wishes, clearly expressed in those documents, is ignored until the doctors decide there is nothing else they can do. Through stories and role-playing he demonstrates the decision points where the family (sometimes inadvertently) give control back to the doctors, even when it goes against the patient’s expressed wishes.

This book is especially helpful for those who are caring for aging parents or who have recently retired and are making important life and end-of-life decisions. Following Dr. Miller’s advice will help avoid “futile care” performed on the grievously ill while planning for a measure of dignity and privacy in death.

For those who prefer video stories or would like to supplement Dr. Miller’s book, in 2007 Mennonite Media produced a DVD resource on this topic which aired on national television, called Embracing Aging: Families Facing Change.  We also produced a website with much helpful information, stories and links. Find the website here. 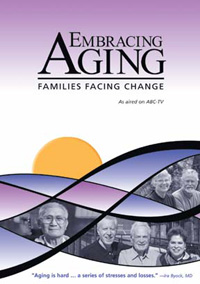 How have you addressed end of life issues with your aging parents?
Do you have a story to share of a good dying or one which was not so good?
It is a difficult fact we sometimes ignore—we will all die. In light of that fact, how do you want to go?
Have you communicated your wishes to those who will care for you?