As a result of the Donald Sterling debacle, in which the owner of the Los Angels Clippers NBA team was recorded making demeaning remarks about minorities, the United States is again involved in a serious discussion of race and racism. Almost 150 years after the last slaves were freed in the U.S., the results of that inhumane and demeaning institution persist in this country.

Mennonite Church USA (MC USA), one of two denominations under which MennoMedia operates, is striving to end racism. In its 2012 Purposeful Plan, denominational leaders established the goal of “undoing racism and advancing intercultural transformation” as one of the church’s seven priorities. Although problems persist, much has changed in society in the last 70 years. It’s interesting to look back on the illustrations used in some of the Herald Press materials (an imprint of MennoMedia) for Sunday school. In the illustrations below, note the predominance of white, European depictions of Jesus and most other biblical characters. 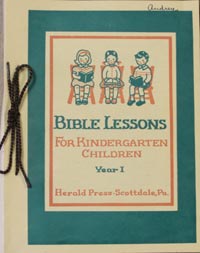 These pictures show the Herald Press Sunday school materials used by kindergarteners for a period of at least about twenty years, from 1946 through the mid-1960s. 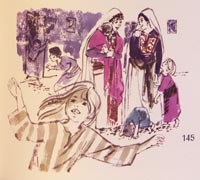 By 1970 the images were beginning to change but were still very Anglo-centric as seen in this illustration from the cover and inside of God Keeps His Promise: A Bible Storybook for Kindergarteners. 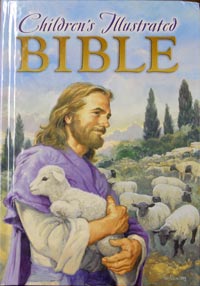 Although Herald Press had little to do with the production of this 2006 Children’s Illustrated Bible Story Book, one-thousand copies were ordered and marketed under the Herald Press imprint. 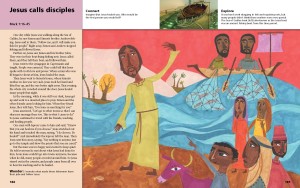 Contrast these earlier photos, from Herald Press Sunday school materials, with our latest foray, in partnership with Brethren Press, into telling Bible stories to today’s children. Beautifully illustrated in full color, Shine On is the anchor storybook for MennoMedia’s new Shine Sunday school materials for children age 3 through grade eight. Primary and Middler Sunday school teachers tell the weekly Bible lessons from the Shine On Bible storybook. Illustrations in the Shine On Bible storybook reflect the diversity of the Christian church around the world. Jesus and his disciples are more accurately depicted with a middle-eastern look.

The Shine On Bible storybook contains reflection questions–under the headings: wonder, connect, and explore–to help families tell and retell these stories at home, thus partnering with the church to nurture faith in children at home. So, the Shine On Bible storybook is not only integral to the Shine Sunday school materials, it is a stand-alone piece which would be an asset in every family’s home to encourage faith formation.

Shine On will also soon be available in Spanish as Resplandece. We are seeking additional financial support to translate it into other languages, which would encourage the many ethnic churches of Mennonite Church Canada and MC USA. Shine On Story Bible is available for $24.99 in the U.S. and $27.49 in Canada. Click here to order you own copy to use at home or pass on to your children to read to your grandchildren.

Have you seen Shine On yet? What do you think?

Do you remember any of the Sunday school materials shown above? Do you still have your compilation of take home lessons, like the set shown above?

In what ways is racism still prevalent in the church? In society?