I serve as MennoMedia’s director of development and church relations. My job is to encourage individual and congregational giving to support MennoMedia’s ministry. I am usually on the road every third week visiting pastors and donors, and telling them about what is happening at MennoMedia.

During my visits I spend a fair amount of time listening and getting to know our donors; their families, their faith, and sometimes a bit about their finances. I also tell them about new initiatives at MennoMedia. Most recently I have shared about Shine, the new Anabaptist children’s Sunday school curriculum. I also tell them about new books we are publishing including the popular memoir Bonnet Strings and Ervin Stutzman’s historical novel Jacob’s Choice.

I think of my work in relation to a quote by Mennonite pastor and development consultant Lori Guenther Reesor of Mississauga, Ontario, Canada who calls fundraising “the joyful and holy task of telling people about the garden and inviting them to water it.” I see my work that way. During each visit my goal is to be a blessing to those I meet and in turn to be open to receiving a blessing on behalf of our ministry. I usually close each meeting with prayer, both for the donor or congregation, and for the work of MennoMedia. I also offer each client their choice of one of MennoMedia’s books or CDs, which I carry with me in the trunk of my rental car.

Each visit lasts about an hour during which donors are usually extremely gracious, often offering a cup of tea with a cookie or a piece of fruit which is sometimes plucked from their orchard. Some invite me to stay with them the next time I am in the area and I have taken several up on that offer.

Most recently, during a trip to Illinois in May, I stayed for two nights with Lotus and Judy Hershberger in their lovely duplex home in the residential community surrounding the Mennonite Church of Normal. When I arrived on a Tuesday night, I learned Stanley Green, Executive Director of Mennonite Mission Network, had been there on Saturday, a few nights earlier, having arrived in preparation for speaking at their congregation on Sunday morning.

Lotus and Judy are wonderful people from whom I have learned a lot about living life to the fullest. Lotus taught mathematics at Illinois State University for 31 years before retirement, while Judy taught Junior High School. Both are involved at Menno Haven Camp and Retreat Center where Lotus served on the Board of Directors for many years and, more recently, as an Interim Executive Director for some months.

Lotus is in great shape physically, due in part to his practice of getting at least 1,000 minutes of exercise each month, a practice I have learned and embraced from him. During his 70th year to celebrate his birthday, Lotus hiked 25 miles over two days from the north rim of the Grand Canyon to its south rim. I hope to be able to do the same when I’m 70! 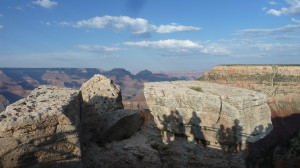 Judy has a generous spirit and a loving embrace. Over the years they hosted and/or housed many international students attending Illinois State University, helping them adjust to a very foreign and unfamiliar environment. During my stay Judy baked a rhubarb pie and served it warm with ice cream.

Both are active at the Mennonite Church of Normal (MCN) where Lotus serves as Congregational Chair. Together with several two other couples they lead a group from church and the Mennonite Residential Community called EATs – Enrichment Activity Trips. Between a dozen and 30 people join them in this monthly outing to a nearby park, museum, business or event which always involves eating together. The week I was with them they were taking a walking tour of downtown. After organizing 118 of these EATs events they feel like it might be winding down.

Before I left I offered them a choice of books from my stash. They picked Saving the Seasons cookbook and Bluffton professor Gerald Mast’s Go to Church and Change the World. We gathered for prayer in their kitchen and Lotus prayed. In their warm embrace, I sensed their love and support for me and for MennoMedia. Lotus asked when MennoMedia’s next fundraising letter would arrive and I told him it would be coming soon. He promised to respond with a gift. As with many visits to various donors, I felt I had given a blessing and received a blessing. 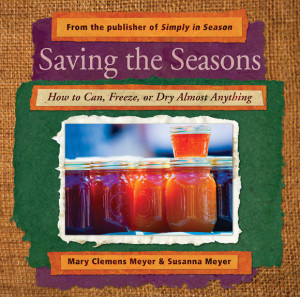 I’d love to hear your comments or responses to any of the following questions:

How do you care for yourself by way of exercise?

Do you have a group with whom you meet regularly for spiritual, emotional, or educational enrichment?

How do you perceive development officers? Do you welcome them and extend hospitality or would you just as soon not see them at your front door?

How is God calling you to be a blessing to others today?