Part I: “I’ll Try”: How a 67-year-old Storytelling Grandmother Came to Author 10 Novels

Mary Christner Borntrager was born the seventh child in an Amish family of ten and went on to author of a series of novels with over 500,000 copies in print.

Earlier this year I was scouring old files here at MennoMedia, where I’ve worked almost four decades under various names and structures. I was looking for photos for another project when I ran across this picture from Choice Books photo files. Choice Books used to operate out of this building, long before Herald Press moved to town.

I knew that we were planning to bring back into print the entire ten-book series of novels, Ellie’s People, written by Mary Christner Borntrager from 1988 to 1998 (Mary died in 2002). There before me was a photo of this author busily autographing stacks of the Ellie series books at a Choice Books event years ago.

Here’s another photograph of Mary addressing an audience at the same event. The joy and excitement shows so well on her face, don’t you think?

Anyway, yes, Herald Press is bringing back the whole series, one book at a time, and the first one is launching today.

Don’t you think Mary is doing a little happy dance in heaven??

I love her daughter Kathryn Keim’s story of how Mary came to write her first book. Her children and grandchildren always begged for another story from Mary’s childhood, so one day she told her daughter, “Maybe I should write a book.” Kathryn encouraged her. Mary herself came to call her genre “faction”: a blending of facts from her life with fiction. See more in our news release on the book here.

Mary’s family says she always enjoyed hearing from readers and pulled a few letters they still have from their files, which I’m excerpting with permission:

“The Lord has sent Mrs. Borntrager’s lovely books to teach many things about families. My husband got me one of the books each year for Christmas. When I read the first one, Ellie, my own children were a lot like Missy’s badly behaved [children]. The Lord used Ellie to teach me some things about disciplining children. Later these books helped me to understand some problems in my marriage, and then helped me decide to make a new commitment to God. Thank you so much, Mrs. Borntrager.” (Bolivar, Ohio)

“Dear Mrs. Borntrager: I met you at the LOGO Bookstore Christmas Open House in Kent, and bought several of your books, of which I have read some and find them enchanting, family oriented, and church centered. These are gifts for my granddaughter.” (Warren, Ohio)

“Dear Mary, … I’m glad to remember you as a 7th grade student … I lost communication with you for 50 years. I went to another school system and you went for more education so you could become a teacher. In the late 1980s, I saw your picture in the paper and when I saw your name, it rang a bell. You were living in North Canton in the same mobile home park that I was. I knocked at your door and we had a nice visit and renewed our friendship. I want to congratulate you on the books you write in the later years of your life on Amish life. It has been so nice to know you as a former student and a good friend. If we don’t see each other again, I know we will meet in heaven. Your former teacher.”

But perhaps most touching of all is a reflection her oldest daughter, Kathryn, wrote as her mother was hospitalized and increasingly weaker. Kathryn helped launch her mother’s remarkable writing career at the age of 67. Mary’s books sold more copies than most writers even dream of. Kathryn had not only first encouraged her mother to write down the stories, she coached her mother into having something new written each time Kathryn came over. Mary always responded, “I’ll try.”

Coming up on Monday, Part II of this post, “And then she was gone …”

Ellie relaunches today! Get yours now HERE–buy several at this price for all the readers you know who might enjoy this book. 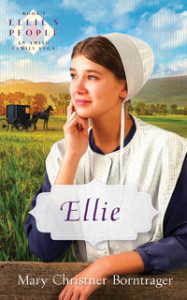 Have you read any of the Mary Christner Borntrager books? We’d love to hear from readers and fans!