Mary Christner Borntrager was born the seventh child in an Amish family of ten and went on to author of a series of novels with over 500,000 copies in print.

Part II: And then she was gone …

“When I walked into the hospital that morning, I was already tired. For the past three months, I had been running back and forth—juggling my household duties, babysitting grandchildren, and taking care of my mother’s things.

“Mother moved in next door to us after my father died of cancer. For 10 years, things went pretty well. Then Mother’s ailments took a turn for the worse. She had TIAs (ministrokes) and heart problems. She was in her 70s and when the doctor said she should not be living alone, Mother moved in to live with my husband and me. She was in our home for four years. Then her health got worse. The morning I called the paramedics, I almost dropped her. She couldn’t walk and had tremors so bad she couldn’t even hold a spoon.

“Now, three months later, she had been in the hospital, then rehab, then a nursing home for the third time. Here she was back in the hospital again, and not doing well.

“I met her doctor in the hall and he gave me an update. The Lupus she had developed taxed her body to the limit causing the tremors to accelerate. He said her lungs were full of fluid again, but felt she was too weak to stand the procedure to clear them. His question was, ‘What should we do?’ My thought was, ‘Please God, I’m too tired to make another decision.’

“The doctor said Mother agreed to have the procedure if he thought it would help. But he wanted my input. I told him as long as Mother could make her own decision, I would go along with it. He said, ‘Why don’t you go in and talk it over with her and I’ll go talk to the other doctors. I just don’t feel good about this. She looks so tired.’

“I walked in the room and Mother greeted me with a weak smile. We talked about getting her lungs drained. She said what she always said, ‘I’ll try.’ I wasn’t so sure but said it was up to her and the doctor.

“Her food tray was sitting untouched by her bed. I asked her if she wanted to eat anything. She replied, ‘Since they were kind enough to bring me something, I should at least try. But I’m not really hungry. I told her she didn’t have to eat, but she said again, ‘I’ll try.’ I gave her a sip of water, and then a bit of pudding. Her mouth moved, and then she was gone.

“I’m not sure what I said when I realized Mother was not breathing. But a nurse came running right away and took over. I sat in a chair and watched in a daze, so many things going through my mind. I wanted to scream, ‘Mother, don’t give up. Please just try.’ Then I realized that Mother never gave up. She lived what she taught us. Keep trying. When things get tough, just keep trying. God is always there to see you through. Just keep trying ‘til He calls you home.

“After my father died, Mother said she sometimes felt like giving up. But then she would remember that as long as you have life, God has something for you to do.

“Her first book had just been accepted for publication about a week before my father died. Yes, she kept trying. The book Ellie, which she wrote while in her 60s, became a best seller for the publisher. When they asked her for more novels, she supplied them with nine more books over the next nine years. At times, it wasn’t easy, but she kept trying.

“I loved to take her to her speaking engagements and watch the people as she spoke. She had a way of making you feel at home. It was like having a cup of tea and chatting with a friend. That is also how she wrote her books—about people’s lives just like hers. The struggles, joys, hopes, and fears. But all in all, never giving up.

“The Ellie’s people series is a wonderful legacy for me to remember how one woman touched many lives through her books and her life. Never giving up. 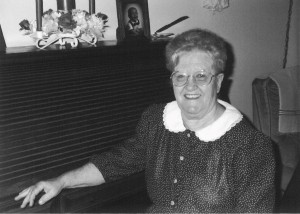 And now, these books are being resurrected to not only provide a whole new generation with entertaining reading, laced with wisdom and inspiration to think through and solve the family problems and issues that face them, like one reader commented above. At least we hope so.

The next book in Mary Christner Borntrager’s
series, Rebecca, is due out Oct. 1, 2014.

Through this legacy of her books, Mary is still helping her small denominational publisher hang in there and keep trying during these difficult economic times for many publishers.

We thank her family for allowing her books to be published again. May another half million be sold! And we’ll all do a happy dance.

Have you read any books in the Ellie’s People series? What was your favorite?

Did you ever meet Mary Christner Borntrager?