Last time I discussed the first two of three steps for designing a book cover, “Problem” and “Process.” Now we’ll get the final stage.

PRESENT: In which the designer presents cover mock-ups to the committee and prays the best direction will result

“The best way to kill a brilliantly creative idea is to show it to a committee.”—said every designer ever.

Although some ideas are not killed quite as dead as others, some truly creative solutions have been strangled by committees, focus groups, authors, brothers-in-law, and other experts. But, lest I sound too harsh or whiney, most of the time this critique process serves to strengthen and refine in positive ways.

I decided to present four ideas: an Amish man riding bike (because that’s how the author got around), an Amish man standing at the Grand Canyon, a softball game, and an Amish man chasing his buggy. I sketched out these ideas, one of which I fleshed out in color to present a style of illustration as a possibility. For the softball cover I found a photo which I thought fit the character of Wisecrack Wanda from the book.

I really felt that the image of the man chasing his buggy fit the humorous nature of the author’s writing best and was the most likely to grab people’s attention. I stated this in our meeting and after short deliberation it was agreed that this image was the most promising. The decision was also made that the cover image should be photographic, not illustrated. This meant finding photos that could be composited or take a photo on location with a model and a buggy. It was also voiced that the typography I had chosen might not appeal to a popular market. This imagery also spurred the change of title from Amish for Life to Chasing the Amish Dream—much more interesting and fitting.

I returned with this information to the Creative Action Center (see the diagram here, the same I shared last time). 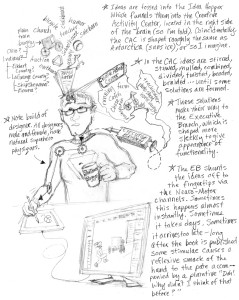 I searched for photos that could work together. At this point I was still making mock-ups and didn’t need a final image yet. I presented two cover ideas based on the Chasing theme.

Additional work was still needed on typography. My fellow designer, Reuben Graham, developed an outstanding logo for the Plainspoken series and it made most the sense to use the same font for the cover type as well.

The author sent us some of his own clothes and a straw hat to use for the photo shoot. I then began carefully looking for the perfect model. Mostly, they had to fit in the clothes and be willing to act like they were running as fast as they could. Also, we needed to compose the model in such a way to obscure his face, since most Amish groups do not appreciate having their photo taken. No, we didn’t hire a highly paid model. I leaned on a willing fellow staffer here at MennoMedia. Now you know.

We got some great options from the shoot and I combined them with a background scene and a buggy. I presented the third round of mock-ups to the committee. The overall imagery was well received but when shared with the author, we discovered that the buggy was an Ohio buggy, not an Indiana buggy.

So we contacted a photographer in Elkhart County and asked her to take a few photos of Indiana buggies from a certain vantage point that would fit into our composition. She pitched a strike and the fourth round cover presentation was a homerun. 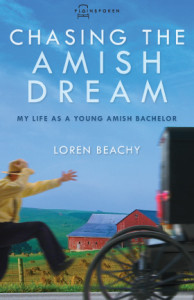 There you have it—cover design in three easy steps.

It should also be emphasized that not all cover designs follow the same path. In fact, I would venture to say that no two cover processes are exactly the same. For example, I like to compare the paths of The Naked Anabaptist and Under Construction.

Under Construction took very little time to determine a direction/image. The actual photo search and assembling those photos in PhotoShop took days. While it is a complex image, it was fun to build.

The Naked Anabaptist didn’t take long once we found the right image. The process of finding the one right image took days of searching and multiple rounds of rejections. While this is a simple image it was sometimes an arduous process—but the end result is just as rewarding.