Over the past eight years those of us who work in publishing and media for the Mennonite Church have on different occasions taken time during the work day, or work week to pray together the “office” during morning prayer. Using our own (Herald Press) published book of daily prayer, Take Our Moments and Days, some of us now take time from our busy work schedules to drop everything and come together in prayer, to pray together the “morning office.” 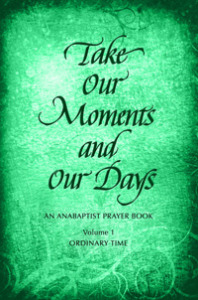 I believe that while prayer is many things: contemplative, personal and corporate, among many other descriptors, it is also work, important work. It is important that we take time for it as co-workers, if we want to be faithful to the God-given mission at MennoMedia and I believe that the success of our mission depends on this work.

Still, many think that this is some unusual practice, something new or even New-Age, or simply an anachronistic relic of the High Church. It is nothing of the sort; rather it is a time-honored tradition thousands of years old, predating Christianity and still practiced universally by a wide variety of Christian traditions. A good description of what it is comes from Phyllis Tickle, in her book The Night Offices.

Like the observance of Sabbath, or the exercise of tithing, like fasting or the sharing of a sacred meal, like the measuring of time by the seasons of the liturgical year or the making of holy pilgrimage, fixed-hour prayer is a spiritual discipline or practice that came into Christianity by inheritance rather than by intention… [it] refers to the holy and regimented interruption of diurnal time for the purposes of prayer and praise before the throne of God.

Calling it “the office” can be a bit confusing because we tend to associate that word with a physical place of work. However, it has a much older definition, referring to a specific religious practice or service, including daily prayer.

While I grew up Episcopalian and was familiar with the Book of Common Prayer and used its morning and evening prayers, for me they tended to be more personal, rather than corporate, though it was not intended that way. Later, while a member of an intentional Christian community, in Elkhart Indiana, I became familiar with another prayer book, Praise God: Book of Common Prayer at Taize, when several of us stopped our work daily to come together to pray the noon-time office. It became a favorite part of my day and started a tradition for me that has had a long-lasting effect.

Over the years I have also collected and used several other resources (besides Take Our Moments and Our Days) for daily prayer, all of which can to be used for corporate prayer. They include: Celtic Daily Prayer, from the Northumbria Community; Celebrating Common Prayer, from the Society of St. Francis; and the previously mentioned Night Offices by Phillis Tickle, one of a series of books about the rhythm of daily offices that she has authored. These are just a few and there are many others that I could mention. All have enriched not only my personal life, but when used corporately make us part of a worldwide movement that crosses continents and time zones, and that has spanned history. I believe it will also be a significant part in seeing God at work in our daily lives and in the lives of those around us and should help us to see God’s “Kingdom come, on earth as in Heaven.”

What are some of the specific prayer or devotional practices that mean the most to you?

The Anabaptist Prayer book is available in two volumes from Herald Press, one geared for the upcoming liturgical season that goes from Advent through Pentecost, and the other for “Ordinary time” which is the rest of the year, pictured above. 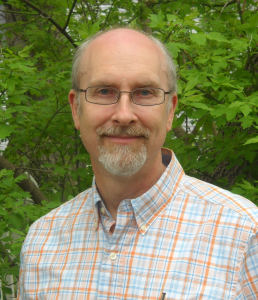