I keep a very cheap child’s magnifying glass on my desk. It’s the remnant prop that I used in co-leading a workshop last May. It never quite got put away and now gets moved around. But sometimes I pick it up and hold it as I sit and think, or it will catch my eye during Skype meetings. 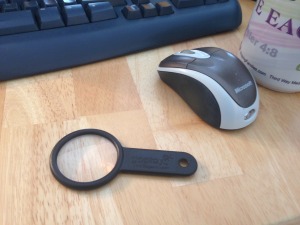 These past weeks I’ve tried to get out my own crystal ball and think more about the future of Christian formation in congregations.

Shine: Living in God’s Light is the curriculum produced by MennoMedia and Brethren Press for ages three through grade eight. It’s in its first quarter of use and we are already asking ourselves, What’s next?

Yes, you read that correctly: while Sunday school teachers are finishing off this first quarter of Shine, we are making plans for three years from now.

What follows is a smattering of tidbits that have piqued my attention on this topic in the last few weeks.

It’s an exciting time to be thinking about faith formation for congregations, and what the future will hold.

What are your predictions? What do you think the future of children’s faith formation should look like? Hopefully it will look as joyful as this child holding her copy of the Shine On story Bible! 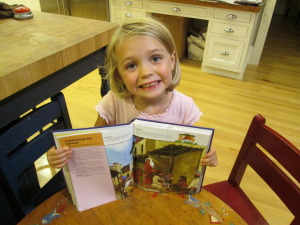 * The survey referred to in this post was commissioned by the Protestant Church-owned Publishers Association, of which MennoMedia is a member. All Mennonite churches were asked to participate in this survey.