Do you delight in going to the movies, or watching DVDs, or streaming “not-current-run” shows or old TV series at home? Or maybe you enjoy winsome, meaningful, offbeat music that not everyone else is reviewing?

I’ve set you up for the pitch: If you are a person of faith, especially of the Anabaptist-Mennonite persuasion, you might find the media reviews at Third Way website to be of value. Especially if you are a youth teacher or leader looking for material to spice up a church school moment or youth meeting.

Many of us take in movies, or watch more TV, when we have a few days off over the holidays. Or you may be looking for unusual music for that special person on your gift list. 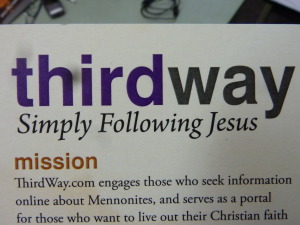 MennoMedia is pleased to have Third Way website (and yes, the update and relaunch is still upcoming, which we’ve written about several times: these things take patience), and offers much e-content including new daily, weekly, bimontly, and monthly posts.

Most of the movies and music we review (and occasional books, advertising, and TV shows) have very little overt religious or Anabaptist content, but our reviewers all come from that perspective or lens. They are all busy people and excellent writers, and avid media or movie buffs who write their reviews mostly out of love. They have to, for the small remuneration we are able to pay them. Earlier this year I compiled this list of links to their “best films from the past ten years.”

Here I’d like to say more about our Third Way reviewers and some of their excellent and varied work.

Vic Thiessen is a seasoned media reviewer and writes a media blog with his brother, Walter Thiessen. For his day job, he was, until recently, the Chief Administrative Officer at Mennonite Church Canada. Before that, he worked for eight years as director of the London Mennonite Centre in England, where he interacted with the UK’s Anabaptist Network. Vic is also the film writer for Canadian Mennonite.

He often reviews a wide variety of indie or artsy flicks that are not hitting every multiplex. Here’ s one example of a film you have likely never heard of but may want to check out: Locke.

Vic often is willing to tackle the films that are so obvious in religious content that they beg to be reviewed here, even though the acting or the plot or the direction is subpar. Here he finds Heaven Is For Real to have “many watchable and discussable moments” even though it may not be his pick of the year for artistic content.

Gordon Houser is a journalist, editor, avid book reader, and film buff. By day (and sometimes night) he is associate editor of The Mennonite, the main denominational magazine of Mennonite Church USA. He is also the author of a book, Present Tense: A Mennonite Spirituality (2011).  You can actually sample his thinking and speaking on a video called “Who are Mennonites in a Time of Diversity and Change?”

Sometimes we’ve provided discussion questions, as with Gordon’s review of Boyhood, but more often we hope teachers or leaders can put together the questions that will work for their focus and group. Gordon is sure to bring out religious or Christian themes in movies he reviews, perhaps because of the fact that he helps put together The Mennonite every month.

Of all our reviewers, you’re most likely to find Gordon tackling a book review (even though I know most of them are always reading books). Here Gordon writes about Lila and the exploration of meaning in life.

Jerry Holsopple is the brainchild behind the beginning of this site, Third Way Café, back in 1998, for which he wrote some of the HTML coding. He is an artist, photographer, and videographer, teaching photography and digital media-related courses at Eastern Mennonite University. Jerry spent the 2009-2010 academic year as a Fulbright scholar at LCC International University in Lithuania. Jerry is the recipient of more than a dozen awards in recognition of his video, public service announcements, and websites. Journey Toward Forgiveness, a documentary that he produced for Mennonite Media in 2001, aired on Hallmark Channel and ABC-TV.

While Jerry is a huge and skilled visual producer in his own right (as well as musician and artist) he focuses mainly on music/album reviews for Third Way, partly because no one else does this very often for us. Here are some of his recent, often eclectic, posts on a wide variety of music/albums:

Matthew Kauffman Smith is a freelance writer and music critic in addition to paying some bills as he works in “middle management.” But he first started writing for us when he was a part-time stay-at-home dad. He has written for the online Propeller Magazine and probably his most unusual post for us was his somewhat tongue-in-cheek “Matthew Kauffman Smith’s First Annual National Mid-Year Music Award Day” where he pokes fun at some of the plethora of show biz awards programs. Matthew’s “music-related” reviews include this one on the recent The Grammy Awards.

Some of Matthew’s best movie reviews, in my opinion, include ones his daughters have seen with him, or that have somehow influenced the review, like the mostly-children’s movie, Brave.

Michelle Sinclair is my daughter (happy to claim her!) but I like to think she would have this job even if I weren’t editor because she writes so well. (Don’t take my word for it, mother’s opinions don’t count.) One of the still-top papers in the U.S., The Washington Post, hires her as an account executive in the advertising division. She is also an author in search of an agent shopping around several novels. She and her husband now have to find a babysitter when they sneak out for their movie fix.  Some of her reviews include, Secretariat and Gravity. Michelle can usually be counted on to take the superhero-adventure flick of the season, such as Guardians of the Galaxy.

With Media Matters reviews now being published over ten years, some of these reviewers have more than 100 individual reviews chalked up, which is quite a body of work. If you don’t care about who wrote what, just check the review archive by media type here. If you want to find movies that a particular reviewer wrote, look under their photo and click on “Other Posts by Gordon Houser” (or whatever the reviewer’s name).

I would love to add an additional woman or a person of color to our reviewer list. Frequently we need to fill in for reviewers taking an extended leave for one reason or another (sabbatical, long vacation, maternity leave). And sometimes reviewers move on to other assignments! Let me know if you’d like to try doing a sample review or know of someone to nominate!

You can sign up for a free subscription to all the reviews, here.