Before becoming Mennonite, I had a twenty year career in the Coast Guard, the fifth branch of the U.S.’s armed forces. I have not kept in touch with many of my former colleagues and rarely ventured back to my roots at the Coast Guard Academy (CGA) in New London, Connecticut, where I graduated as an Ensign in 1977.

But this year, on Nov. 16, I went back for a memorial service for Betsy Teuton, the wife of Hank, my best friend in college. She died after a two-year battle with ovarian cancer. Approximately 600 people gathered in the academy’s auditorium for a time of worship and reflection on her remarkable life and witness. Betsy radiated Christ’s love and extended hospitality to all, but especially to the cadets at the CGA where she and her husband served as the campus representatives of the Officer’s Christian Fellowship (OCF). OCF is similar to InterVarsity Christian Fellowship except they have chapters on military academies and bases rather than on college campuses.

Betsy’s memorial service began with the blowing of a shofar, reminiscent of ancient Israel’s call to worship. Music permeated the memorial with professional military band members and a praise band comprised of current and former cadets leading those gathered in worship. The Superintendent of the CGA, Rear-Admiral Sandra Stosz, gave testimony to Betsy’s influence on the cadets.

Later, during a reception in the auditorium’s ball room she honored Betsy with a posthumous “Commander’s Award” which she presented to Hank. It was a beautiful service marked by genuine love and regard for the deceased and infused with heartfelt worship. Betsy was a remarkable woman who was deeply loved and will be sorely missed.

However, I no longer felt entirely at home in this setting. The memorial was characterized by military protocol, although not a stuffy formality. A retired CG Captain officiated over well-dressed participants, many of whom had short cropped haircuts and wore military uniforms. The evening was also infused with deference to rank. For example, I was repeatedly called “sir” despite being in civilian garb, and the places of honor were occupied by admirals and other senior military officers. A senior military chaplain offered his words of remembrance. There were video appearances by Vice-Admiral Lee, Commander of Coast Guard Atlantic Area, along with several foreign missionaries.

You can imagine, then, how surprised I was when I noticed a casually dressed young couple, with the gentleman sporting dreadlocks. They were quite noticeable. I inquired about who they were and, to my surprise, learned the young woman, Sarah, is the daughter of Bob Durfey, another of my best friends during college. He was the retired CG Captain who emceed the service.

I sidled up to this young couple during the reception and remarked, “You guys are a breath of fresh air in the midst of all of these starched shirts!” Sarah was present with her boyfriend Jared, whom she met in San Francisco. I told them they reminded me of Shane Claiborne and asked if they knew of him and The Simple Way community he leads in Philadelphia. As expected, they did know and admire Claiborne. However, I was flabbergasted to learn that earlier this fall they were in Harrisonburg, Virginia, now my hometown, to attend the wedding of some Mennonite friends at Early Church. They said they were impressed with the work Mennonite Pastor Ron Copeland is doing at Our Community Place.

Here, standing before me, was a young woman who had grown up in the same military circles in which I formerly moved. She too was discovering Mennonites, but unlike my experience, she discovered them through her involvement with the alternative Christian voice expressed in the New Monastic movement.

One of the reasons I enjoy working at MennoMedia is that we project an alternative Christian viewpoint, expressed in Anabaptist thought and practices, into the marketplace of ideas. Herald Press books are often one link in the road some follow as they discover a people dedicated to following the Prince of Peace. The theology, lifestyle, and thinking of Mennonites is often very different from that of military chaplains and senior officers.

I didn’t have the opportunity to ask Sarah if she knew Joanna Shenk, associate pastor of First Mennonite Church of San Francisco and the author of Widening the Circle, the story of alternative Christian communities in the Mennonite orbit. 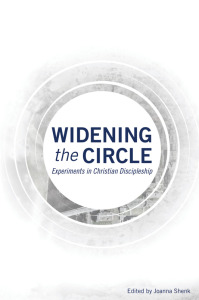 There are two other recent Herald Press books that I would have liked to have given to some of my friends gathered at Betsy’s memorial service. These books could introduce this Coast Guard audience to an alternative expression of Christian faith that seeks to follow the Prince of Peace above country. They are:

For God and Country [in that order] by Logan Mehl-Laituri 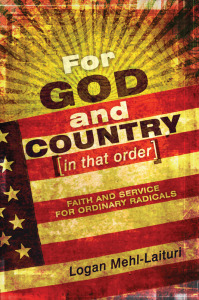 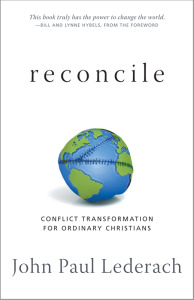 Bill Hybels, co-founder and senior pastor of Willow Creek Community Church near Chicago, wrote a glowingly endorsement of Reconcile saying, “Lynne and I feel deeply called to the work of peacemaking these days. We know it is very near to the heart of the One we serve. No one’s writings have helped us more than John Paul Lederach’s.”

I was encouraged by Sarah’s experience with her Mennonite friends. I wish my military friends and classmates could also be exposed to Mennonites and their alternative expression of The Way. MennoMedia is an important link in this chain of influence, supporting relational witness with well-reasoned arguments and stories presented in print and other media forms.

Thank you for supporting MennoMedia’s work through your donations, and by buying, using, and sharing our materials.