Helen Good Brenneman wrote quite a list of books, two of them bestsellers by anyone’s count. Her first book, Meditations for the New Mother, first published by Herald Press in 1953, has 534,000 copies in print over the last 60 plus years. Meditations for the Expectant Mother, published in 1968 includes 240,000 copies in the last 45 plus years. Together that’s almost three quarters of a million in print. Ask any published author—or publisher—if they’d be happy with those kind of numbers and you’d likely get a whoop and a holler.

Notice anything kind of funky about that publication sequence? Helen wrote New Mother first, while she was in the thick of parenting at least two small children (with two more to come). She would have been the original mommy blogger if there had been an Internet back then.

When the publisher saw how well New Mother was doing over the years, they pressed her into service to write another similar title, for expectant mothers. Long after her last pregnancy! But she pulled a second beautiful book together, Meditations for the Expectant Mother.

Helen was a born writer, poet, and fine Christian mother, who also dealt with multiple sclerosis and spent many years in a wheelchair. She and her husband Virgil, a pastor, lived in Goshen, Ind. Since my parents lived near Goshen, growing up I knew of Virgil and Helen, and my mother was a fan of Helen’s books. Mom had heard her speak at women’s meetings, and so in our fairly small world, Helen was a household name.

That was all I knew about Helen until I entered Bethany Christian, a Mennonite high school in Goshen in ninth grade. One of the girls I met early on was Helen’s oldest daughter, Lois Brenneman. I was quite impressed to meet the author’s daughter. 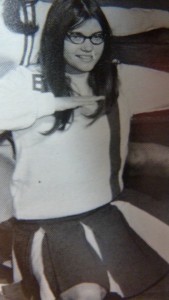 She did not remain “Lois” or the daughter of a popular bestselling author for long. She announced firmly one day, “I’m just not a Lois. Do I look like a Lois?” For a while she asked us to call her Toby George (as a yearbook autograph reminded me). 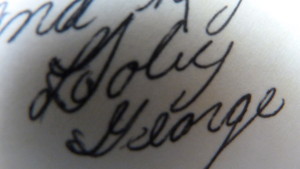 Eventually she married Joe Goldfus and legally changed her name to Tobi Goldfus. She is a clinical social worker and therapist in Germantown, Md., where one of the current issues she deals with is social media/cyberspace and its impact with adolescents/young adults. The parents of one adult son, Tobi presents workshops and seminars on the topic. 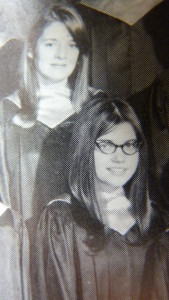 Tobi was a fun-loving friend who wasn’t afraid to speak her mind. We hung out in a group of about eight girls. (That’s me standing behind Tobi in choir. What fun!) 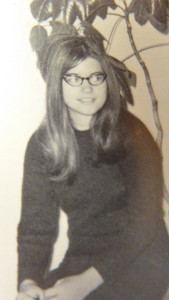 Our gang had slumber parties, congregated at class parties or ballgames, ate lunch together if our class schedules allowed, and when we became old enough to drive, cruised around town to great peals of laughter over in jokes. Then I moved away my senior year of high school, stayed out of college a year, and while I ended up at the same college as Tobi, Eastern Mennonite, we were in different class years with varied circles of friends. Thus our ways pretty much parted.

So when I was assigned to work on bringing back into print a series of meditation books which were long-running bestsellers for Herald Press, including the two by Helen Good Brenneman, I was excited. What an honor. And I was just a little uncertain as to what Tobi and her family would think about having these books—written in the late ’50s and early ’60s—in print again.

While many readers and fans of the devotionals had continued to ask for the Meditation books in bookstores and hospital gift shops (according to our market research), the books, writing, and era were, after all the ’60s. Not 2015. Have you considered how much has changed about having babies and raising children in 50 years—including our language (even our theological language)? Parenting roles, rules about fathers in delivery rooms, equipment, trends about how to care for babies? A sea change!

Yet there are things that remain the same. Babies are still mostly born after a long, hard, and painful labor. Loving and doting mothers and fathers still pace through sleepless nights and jiggle incessantly crying babies. No matter how many gadgets and types of baby equipment we have, the love ingredient is the same. (I can only imagine how Helen would have benefited, with her limited mobility because of MS, to have had a video monitor watching over her little ones in the nursery!) Our files contain several cards and letters that indicate how much of a struggle Helen had even compiling the manuscripts because of her vision and other limitations. 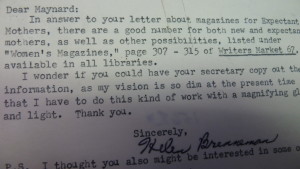 When Tobi heard the news about the books coming back in print, she wrote that it was a “surprise and delight.” She was glad to hear that the language was updated a bit “to better connect with today’s women.” She also said that she and her siblings are extremely appreciative for the way that the royalties from these two books helped to pay for their mother’s nursing care in her later years after their father, Virgil, could no longer physically care for her. Helen died in 1994. Virgil was a pastor or church administrator most of his life and he remained active and involved in church and community life until he passed away in 2006. Their additional children, Don, lives near Vancouver, BC, writes, and has a milder version of MS; Beki Denman is an obstetrician-gynecologist in Indianapolis; and youngest son John lives in Goshen, retired from the Teamsters, and works for South Bend transit.

Helen was actually born in Harrisonburg where Herald Press is now based, and grew up outside of Washington, D. C.  She began working for the U. S. Department of Agriculture at age 16, and at 18 attended Eastern Mennonite College for one year before returning to work in Washington. Virgil was originally from Iowa; Helen and Virgil married in Amsterdam right after the end of World War II. There they lived at a refugee camp out of which Helen wrote, But Not Forsaken, a novel about the German Mennonite refugees she encountered there.

There may have been more—she was a frequent writer in the denominational weekly magazine of the time, Gospel Herald. What a rich and beautiful legacy to leave the larger church and her family. I would be remiss not to point out that Herald Press, as a church publisher which has had its own financial ups and downs through the years, also benefited from her legacy—and indeed a small portion of my own modest salary is paid by these two devotional books written by a friend’s mother so long ago. How cool is that?

So that’s a long back story with a little peek into the family life of this bestselling and well-loved author.

We’d love to hear your own story related to either of Helen’s Herald Press Meditation books: did you or your mother ever use either Meditations for Expectant Mothers or Meditations for the New Mother? Send us your story or her experience—even just a few words of what the books meant for them, and we’ll place your name in a drawing for free copies of both books! Please share this also with anyone else you know who read and used these books. Thank you! 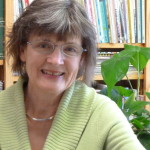