I love a good party. Perhaps that’s to be expected of a Director of Development and Church Relations. You’d think someone whose job it is to meet people would of course enjoy being in a crowd. But the party I am referring to was a special party and a special crowd. About 80 of my family and friends gathered in a large church fellowship hall on Saturday, Feb 28th to help me celebrate my 60th birthday party which occurred two days earlier.

Two of my brothers and their wives traveled from Rhode Island to be there, while my third brother came with his spouse from Fairfax, VA. And, of course, my daughter Janelle, her husband John, and our only grandchild Michelle (less than three months old) were there as well.

The event was not a typical birthday bash. Although, cake and ice cream were served and there was an assortment of finger foods, like you’d expect at any party, this one was different in at least three ways.

First, it wasn’t just a gathering of my friends; rather we came together to support the ministry of MennoMedia. I asked the invited guests to make a contribution to MennoMedia rather than give me a gift. Even many who could not come made a contribution while R.S.V.P.’ing with their regrets. More than $7,300 was raised, netting $5,700 for MennoMedia’s ministry after expenses.

Second, rather than toast the birthday boy, we watched a movie dear to my heart, Pearl Diver, which is about a Mennonite community in Indiana. Two little girls saw their Mennonite mother murdered and the story revolves around how it affected their lives on somewhat different paths. It was released in 2004 garnering several awards. It was an extra special treat to have the film’s writer/director Sidney King introduce the film and answer questions afterwards.

Third, I launched my new book Mennonites and Media with a book signing during the hour before the party officially began. 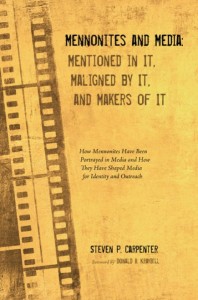 Although published by Wipf & Stock and not Herald Press which is an imprint of MennoMedia, the book deals with Mennonite faith and identity as reflected in popular media, including books, movies, art and proclamations. Pearl Diver is one of the films examined in the book.

The last time I threw a party this big was for my 50th when I was Conference Coordinator for Virginia Mennonite Conference (VMC). That time we rented Court Square Theater and watched Chariots of Fire, another of my favorite films. That event raised $5,500 for VMC.

This may not be a typical way to celebrate the passing of a decade by I enjoy these events. Lord knows I don’t need another thing, although friends and family often feel they want to give you something on such a momentous occasion. How much better it is to shift the focus from yourself to an organization you believe in and support. The theme of faith and media unified the evening and everyone seemed to have a great time. I’ve heard of even children who ask their friends to bring canned food or stuffed animals or other donations to their birthday party to benefit other kinds of charities.

That night the question was asked, “What organization will Steve be raising money for at his 70th birthday?” The answer came, “Probably Virginia Mennonite Retirement Community!” I hope I can carry on this tradition on my 70th. We’ll see what the Lord brings.

If you missed the opportunity to donate to MennoMedia in honor of my 60th birthday, it’s not too late. Click here to make a contribution.