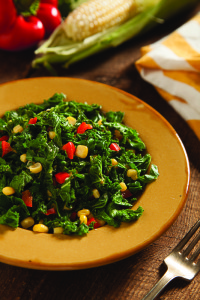 The new edition of Simply in Season cookbook contains colorful photographs of seasonal dishes and an expanded fruit and vegetable guide that outlines every step of care for produce once it is out of the garden, from storage to preparation. Accompanying these descriptions are some identifying characteristics, nutrition facts, and selection guidelines for each fruit or vegetable.

Written by Mary Beth Lind and Cathleen Hockman-Wert, the cookbook will be released in late May and is part of the World Community Cookbook series published by Herald Press in cooperation with Mennonite Central Committee.

“Many excellent cookbooks have come along in support of the local food revolution, but there is still not a better one than this,” says Steven L. Hopp, coauthor of Animal, Vegetable, Miracle with his spouse, Barbara Kingsolver. 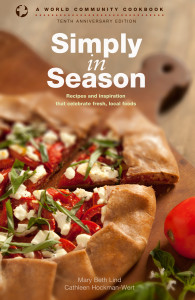 Originally published in 2005, the book has over 141,000 copies in print. Readers will still find the accessible recipes of the previous edition, along with stories that provide insight into the world of sustainability.

Menu suggestions frame each of the seasonally based chapters in this new edition, including a weeknight menu for quick preparation, a weekend menu for entertaining, and a vegetarian menu. In addition, qualifying recipes are now labelled as gluten-free or vegetarian for quicker identification.

While some parts of the cookbook have changed, the components of Simply in Season that first won a spot on kitchen shelves remain. The recipes are accompanied by anecdotes on such topics as sustainability and gardening practices. A recipe like Pork Apricot Skillet, for instance, includes information about how different farming conditions and diets affect animals. Another short piece looks at which fruits are easiest to grow at home.

The connection between food, people, and God is a central theme to Simply in Season. 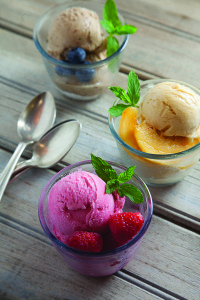 The cookbook is full of advice and suggestions. Graham Kerr, of The Galloping Gourmet, notes: “What you read here comes from a voice that is pastoral, not judgmental . . . expect to be lovingly challenged in your decision to eat what is fresh and in season.”

Mary Beth Lind and Cathleen Hockman-Wert coauthored the book, with help from submissions from all over North America. Lind is a nutritional consultant and dietician, and helped found a Christian retreat center called Mountain Retreat. She works as a market gardener in West Virginia. Hockman-Wert lives in Corvallis, Oregon, where she works as a journalist and is an avid farmers’ market shopper. Both authors show commitment to Simply in Season’s mission of sustainable, healthful food in their daily lives. The book was originally commissioned by Mennonite Central Committee, with the MCC portion of royalties helping nourish people around the world.

Catherine Walthers, author of Raising the Salad Bar and Greens, Glorious Greens, appreciates the book’s organization and style of recipes. She names it “an essential kitchen companion for all of us who love to get our food from our own backyard, local CSA, or farmers’ market—and always need new ideas. This is a book I will turn to over and over again. [Lind and Hockman-Wert have] put the recipes in the most organized, easy-to-use cookbook I’ve seen.”

Green Living Ottawa says of the book, “I’ve tried a few cookbooks that were advertised as ‘seasonal,’ but the only one to live up to its cover blurb has been Simply in Season.” 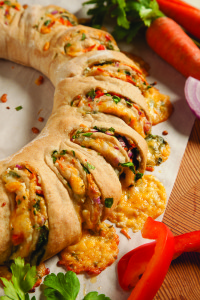 Simply in Season: Tenth Anniversary Edition hardcover/spiral edition is available for $24.99 USD from MennoMedia at 800-245-7894 or www.MennoMedia.org and at local bookstores.