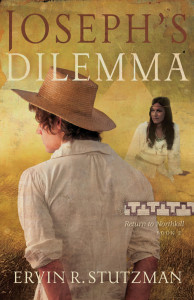 Joseph’s Dilemma focuses on an oft-unexplored portion of history: the interaction between Amish settlers in Pennsylvania and the Delaware Indians during the brutal French and Indian War. Though fictional, the book is based on true events that occurred during the war, which ran from 1754 to 1763 along the eastern coast of North America from Virginia to Nova Scotia. Herald Press will release this second installment in the Return to Northkill series in mid-June.

In the book, Joseph, his father, Jacob, and his brother Christian are captured by Delaware Indians during the French and Indian War. While at first Joseph rejects the customs of his captors, he gradually begins to feel like an adopted part of the tribe rather than a prisoner.

As Joseph’s Amish heritage pulls him in one direction, a love interest within the tribe and a growing connection to the culture of the Delaware Indians pull him in another. When the British pressure the native people to give up their captives under threat of death, Joseph determines never to go back to his Amish community.

Joseph’s Dilemma presents the plights of the indigenous people and the immigrants next to one other. Through Joseph’s eyes, the realities of settler atrocities committed against the Native Americans come into focus, as does the harm done against the immigrants.

Stutzman’s past work has been recognized for the thoroughness of its research, and advanced praise has earned Joseph’s Dilemma similar accolades.

“A great story about an Indian mother and her adopted Amish son who became an Indian,” noted C. Rusty Sherrick, an interpreter of Delaware history. “A young white man crossed the cultural barrier that separated two very different peoples. His eyes were opened and would never see the same again.”

Marta Perry, author of the Keepers of the Promise series, writes, “The author’s careful use of historical details gives the reader an interesting perspective, seeing events through the eyes of a young Amish teen captured by the Delaware Indians who becomes an adopted son.” 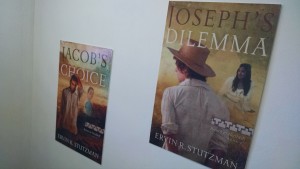 Joseph’s Dilemma connects to Jacob’s Choice, the first book in Stutzman’s Return to Northkill series published by Herald Press. These books based on true events tell the story of the Hochstetler family from whom many Swiss-German, Amish, and Mennonites are descended. While Joseph’s Dilemma contains allusions to events in the earlier novel, it stands alone in its narrative arc and focuses on Joseph’s, rather than Jacob’s, experiences with indigenous inhabitants.

Christian’s Hope, the third and final book in the Return to Northkill trilogy, is planned for release in Fall 2016. It follows Joseph’s brother Christian after his return to his Amish community. Many descendants of Jacob Hochstetler are found in North America and participate in various historical associations, including the Jacob Hochstetler Family Association, which meets every five years.

Stutzman, executive director of Mennonite Church USA, was born into an Amish home in Kalona, Iowa, and currently resides in Harrisonburg, Virginia.

Stutzman’s other Herald Press publications include Being God’s People; Tobias of the Amish; Emma, A Widow Among the Amish; Creating Communities of the Kingdom, which he co-authored with David Shenk, and Welcome!