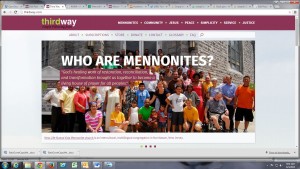 Website continues to inform and provide resources about Mennonites

HARRISONBURG, Va. and KITCHENER, Ontario—For almost two decades, Third Way website has supported seekers in learning about Mennonites. Seventeen years after the website’s inception, it has received a major design overhaul through MennoMedia.

The revamped website officially launched on June 3, although a soft launch occurred in mid-April for troubleshooting. The site can be found at www.thirdway.com. It maintains its original mission of providing information and resources about Mennonites, as well as supporting those who wish to live out a faith that aligns with Anabaptist values.

After receiving a major grant from the Schowalter Foundation of Newton, Kansas, for the project in 2013, MennoMedia set up a focus group with a range of Mennonites involved with the church or media work to discuss and set priorities for the new site. “The focus group responded to some key questions about the site and were extremely helpful as we put together the site’s new mission statement and zeroed in on seven main content areas,” said Amy Gingerich, editorial director for MennoMedia and overall supervisor of the revamped site.

A design firm, 427 Design, based in Akron, Ohio, created the new site, now housed on a WordPress platform. Design changes include a new color scheme and a more easily navigable interface. The website name was shortened from Third Way Café to Third Way.

The website is divided into seven key sections: Mennonites, Community, Jesus, Peace, Simplicity, Service, and Justice. These sections cover topics ranging from Mennonite views on capital punishment to overviews of different types of Anabaptists. FAQs and a glossary also help to guide seekers through the website.

Users can also choose to sign up for any of six free email subscriptions: Daily Scripture, a daily Bible verse reflecting Mennonite/Anabaptist values; Another Way, a weekly article focusing on spiritual growth at a personal or communal level; Living Simply, a twice-monthly column by Celeste Kennel-Shenk; Media Matters, a weekly review by a variety of writers; Stories of Peace, a monthly story of peacemaking from around the globe; and Wider View, a twice-monthly update on social policy issues from MCC’s Washington Office.

“The former Third Way Café served the Mennonite churches well in terms of explaining Mennonite beliefs and practices to a wide audience, but the look, feel, and navigation of that site had become quite dated,” noted Gingerich. “So while people came to the site, our statistics showed that too often, they immediately went elsewhere. With the new Third Way we have a site that really catches attention visually and is easily navigated. We are already seeing that high bounce rate coming down.”

The new site opened possibilities for sponsors to support Third Way, and interest in
sponsoring has been high. Everence and Mennonite Mission Network are the site’s top-level sponsors. Other options include second- and third-tier sponsors. Links for individuals to donate can be found on the website.

In recent years the site has averaged 500 to 800 hits a day, with peak days spiking to 2,000 or 3,000 a day, especially after tragic events involving Mennonites or Amish or, in recent years, with the introduction of Amish “TV reality” shows.

When the site began in 1998, it was an outreach of Mennonite Media, a department of the predecessor agency of Mennonite Mission Network. Jerry Holsopple, now a professor of Visual and Communication Arts at Eastern Mennonite University and a renowned videographer and graphic artist with a theology background, conceptualized and designed the original website. Currently, Third Way website is part of the ministry of MennoMedia, owned by Mennonite Church USA and Mennonite Church Canada. MennoMedia became the name for the combined agency of Mennonite Media (briefly named Third Way for the whole agency from 2009 to 2011) and Mennonite Publishing Network, which joined in 2011.

“Since its beginning in the 1950s, the Mennonite church public media efforts sought ways to educate a general audience who inquired about Mennonites through radio programs such as The Mennonite Hour and Heart to Heart,” recalled managing editor for the site, Melodie Davis. At that time, methods of following up with inquirers included brochures, personal letters, and telephone calls. “Today we’re happy to still offer personal email responses to those who send inquiries to the website through volunteer workers Angela and Erwin Rempel,” Davis pointed out. The Rempels have served as long-term mission agency workers in various countries and the United States.