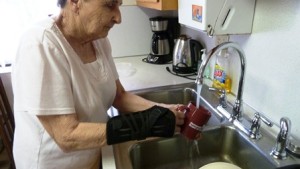 Doris Sites, housekeeper at MennoMedia offices in Harrisonburg will turn 87 on July 8. Could she be the oldest employee at any Mennonite agency office in the U.S. or Canada? We’d love to hear if anyone at your office or agency can top this record!

Not even a fall or car accident keeps her from her appointed rounds every afternoon for about 2.5 hours at MennoMedia. Not only that, she works another 2.5 hours every morning at nearby Park View Federal Credit Union, a financial institution that was started in 1969 to serve Mennonite agencies and their employees (including Eastern Mennonite University). 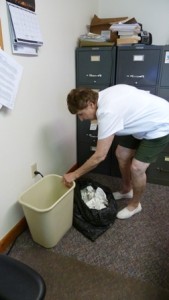 In both places, she picks up mugs and washes them, empties wastebaskets, tidies the bathrooms, makes sure they are stocked with necessities, cleans the kitchens, and checks in on how we are, how the kids or grandkids are, who is sick, and where we’ve been if we’ve been out for a few days.

Doris has been cleaning the offices of MennoMedia since the early 1980s, starting back when it was called Mennonite Broadcasts, Inc.  Ken Weaver was the executive director at the time and his administrative assistant, Lovina Troyer, went to church with Doris at Ridgeway Mennonite. Lovina told Doris about an opening for someone to clean the offices. Doris applied and began doing the daily cleaning and the heavier weekend cleaning of 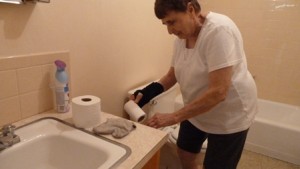 vacuuming the entire office, cleaning floors in the kitchen and bathrooms, dusting, windows and more. Doris is now a member of Grace Covenant Church in Harrisonburg, a large and active non-denominational congregation on the southern edge of town.

Her faith has kept her going through a trial that began last fall when her son, Gary, was diagnosed with leukemia. After going through chemotherapy, he learned he would need a bone marrow transplant to have the best chance of long-term survival.

He has five siblings but none of them proved to be a match. The search for a family donor of bone marrow widened, and one candidate was found who matched 99 percent. But doctors said that only a 100 percent perfect match would work.

Eventually a match was found from someone in another country. As is normal in these situations, members of the Sites family do not know the name or location of the living donor who willingly shared his life-giving bone marrow for a complete stranger in a far-off country. The transplant finally took place in February 2015. Doris’s son and his wife now live in temporary quarters near their hospital in Richmond, Va., and he has been able to come back to his home in Harrisonburg for several visits, which will get him acclimated to germs and dangers found in normal living. Doris and her family are very grateful his healing process is going as well as it is; Gary hopes to be able to move back to Harrisonburg late in July or early August.

Then on Mother’s Day (May 10, 2015), Doris stood briefly on a stepstool in her home and lost her balance. When she did not show up for work May 11, two staff went to her home and learned she had taken a fall (and that she had tried to call in). She hurt her wrist as she fell, jabbing her right arm down on the floor and hitting her head. She went to her regular doctor, who X-rayed her wrist. It was broken so she was referred to an orthopedic surgeon. Surgery was scheduled for May 19, but meanwhile Doris kept her appointed cleaning rounds (except for emptying waste baskets). After her surgery, Doris was off a few days, including Memorial Day on May 24, but eagerly returned to work May 25, even though washing dishes with one arm in a brace isn’t the easiest. 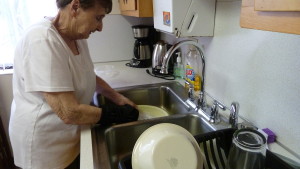 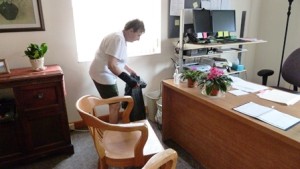 When asked why she’s still working at age 86 going on 87, she explains, “I don’t like sitting around.”

Doris also very much appreciates her pay, enabling her to stay independent and living in a nearby trailer court. Currently she has to go to physical therapy on her wrist two times a week.

Both organizations, Park View and MennoMedia, have traditionally included Doris in their annual Christmas banquet or celebration. In 2008, Mennonite Media (as it was named then) had a birthday party for her when she turned 80.

Doris is one of the friendliest employees—to anyone, never hesitant to strike up a conversation. She appreciates being able to work in two Christ-centered organizations.

If you work for or are familiar with a Mennonite church agency, do you have any older employees who are proud of it? We’d love to hear whether Doris tops them all! Let us know if you know someone paid for work (not volunteering) at an age that tops 86!