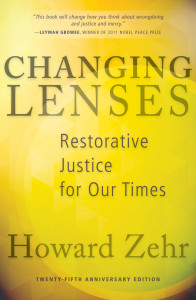 HARRISONBURG, Va., and KITCHENER, Ontario— Changing Lenses: Restorative Justice for Our Times by Howard Zehr remains the go-to text in the restorative justice field even twenty-five years after it was first published. Herald Press launched this updated edition in June. The book’s original subtitle was A New Focus for Crime and Justice.

Changing Lenses has been endorsed by 2011 Nobel Peace Prize winner Leymah Gbowee, saying, “This book will change how you think about wrongdoing and justice and mercy.”

Michelle Alexander, author of the groundbreaking book The New Jim Crow, says “Now that our nation is finally beginning to come to terms with the immorality and irrationality of our criminal injustice system, I hope that we will reread Howard Zehr’s classic text, Changing Lenses, and accept his challenge to reimagine what justice ought to look like.”

Now with updates by the author and resources for teachers and practitioners, Changing Lenses offers a framework for understanding crime, injury, accountability, and healing from a restorative perspective. “It offers a distinctly Christian viewpoint to understanding reconciliation as part of faith,” states Herald Press Editorial Director Amy Gingerich.

Zehr himself updated terminology and some of the book’s paradigms, and provided additional recommended reading on the topic. Restorative justice practitioner sujatha baliga [who prefers her name uncapitalized] wrote a new foreword, and resources for teachers, facilitators, and practitioners have been added as well. A new chapter on victim-offender approaches has been added in light of significant changes in the field in the last 25 years. 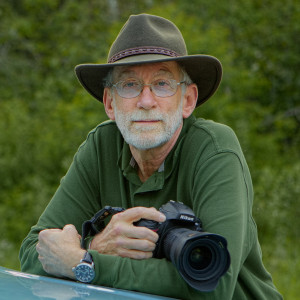 Zehr has led hundreds of events in more than 25 countries and 35 U.S. states. His work has included trainings and consultations on restorative justice, victim-offender conferencing, judicial reform, and other criminal justice matters. He has had particular influence in the United States, Brazil, Japan, Jamaica, Northern Ireland, Britain, the Ukraine, and New Zealand, the latter of which has restructured its juvenile justice system into a family-focused, restorative approach.  The University of Alabama also awarded Zehr the 2015 Ireland Distinguished Visiting Scholar Award for his work.

A joint retirement party and book launch for Changing Lenses was held May 23 at Eastern Mennonite University, where Zehr taught for 19 years. Zehr will remain codirector of the Zehr Institute of Restorative Justice alongside Carl Stauffer. Both Stauffer and Zehr were tapped by national media for comments after the shootings targeting the Emanuel African Methodist Episcopal Church in Charleston, South Carolina on June 17.

At the retirement event, Charito Calvachi-Mateyko, a founding member of the nonprofit Latino Initiative on Restorative Justice, spoke of Zehr’s influence on her personal journey from her native Ecuador to her current work as an educator and restorative justice trainer in many Latin American countries.

Sister Helen Prejean, whose work was featured in the book and film Dead Man Walking, says of Changing Lenses, “Maybe one day we’ll integrate some of the principles of civil law into criminal justice, as Howard Zehr advises in his book.”

Changing Lenses has been widely used in undergraduate and graduate courses on restorative justice, criminology, peacebuilding, and conflict transformation at Protestant and Catholic universities. It has been translated to Russian, Japanese, Ukranian, Korean, Arabic, Portuguese, and Italian.

Zehr is also the editor, coeditor, or author of numerous books on the subject of crime, peacebuilding and restorative justice.