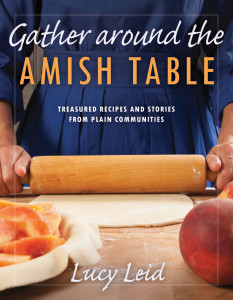 HARRISONBURG, Va. and KITCHENER, Ontario.—“It’s one of the blessings of life to share ourselves with each other.” So writes Old Order Mennonite compiler Lucy Leid in her introduction to Gather around the Amish Table, a cookbook released by Herald Press in August.

Gather around the Amish Table is an updated edition of Leid’s previous compilation, Countryside Cooking & Chatting released by Herald Press back in 2006. In light of the perennial popularity of Amish and Mennonite cookbooks, editors updated and retitled Countryside Cooking & Chatting, added new full color photography, and retested and revised recipes.

Originally Leid gathered recipe submissions and stories for the book project via Die Botschaft, a weekly periodical popular in her community as well as other Mennonite and Amish communities across the United States. In the book’s introduction, she describes her goal in the creation of the book: “There are so many cookbooks around, but I wanted a cookbook with stories in it, too, with the kinds of sharing I enjoy from Die Botschaft.”

Recipes vary from family sized dishes to the 120 pies and 50 pounds of roast beef required for a barn-raising. Accompanying the recipes and simple step-by-step instructions are stories submitted by the same cooks who shared their recipes. 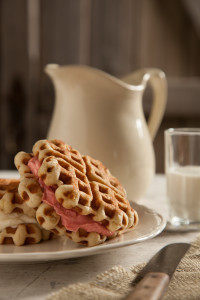 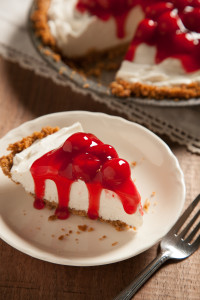 Leid has included her own kitchen tips spread throughout Gather around the Amish Table, from adding wheat germ to make peanut butter and jelly sandwiches healthier to suggestions about how to use water left over from boiling eggs.

Leid lives in Lancaster County, Pennsylvania, where she and her husband run an evergreen nursery and belong to a local Old Order Mennonite church community, the Groffdale Conference, and use horse and buggy transportation.

“As I paged through the recipes and poured over the photos in Gather around the Amish Table, I found myself thinking again and again, I’ve just got to try this! There are so many recipes in here just waiting to become new family favorites,” says Georgia Varozza, author of Homestyle Amish Kitchen Cookbook.

Midwest Book Reviews says the book is a “prized and thoroughly ‘kitchen cook friendly’ addition to the family cookbook shelf.”

Lovella Schellenberg, one of the authors of Mennonite Girls Can Cook, says of Leid’s compilation: “Reading through the treasure of recipes allows a glimpse into the home life of a community that gathers around the table for fellowship, with thankfulness for the bounty that God has provided them.”

Gather around the Amish Table is available in paperback for $19.99 USD from MennoMedia at 800-245-7894 or www.MennoMedia.org, as well as at bookstores everywhere. 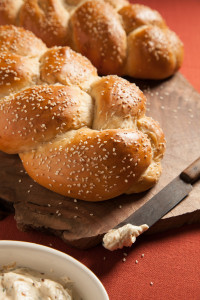