A few short months ago, I began an internship in the world of publishing at MennoMedia in the editorial department of Herald Press.

Since then, I have:

The internship was pretty informal; I averaged 2-3 hours a week, and most of my work involved proofreading manuscripts and emailing them from the comfort of my own home.

I’m seriously considering editing as a career path, and everything about this internship confirmed that interest for me. The fact that I was, for the most part, doing pretty boring work and still came away loving the experience helped. It also confirmed for me that this is something I can actually do pretty well, and maybe, just maybe, I could take these talents to a real job someday, a job that I enjoy.

What I wanted to get out of this internship was experience, education about the field of publishing, and a nice little blurb on my resume. And I got all of those things. But I also got a tiny taste of the scope of MennoMedia, an organization about which, before this summer, I knew surprisingly little. I grew up Mennonite, so the MennoMedia logo is a very familiar one: from Sunday school curricula to Amish fiction in the church library, I encountered it a lot. I even worked at a Christian bookstore for three and a half years, and I’m sure I sold plenty of their stuff. But I never really saw it or noticed how much of what I read bore that little dove and olive branch. And since I worked on a lot of nitty-gritty stuff, I still don’t have a great sense of the big picture. But even just in the limited capacity in which I worked, I encountered all sorts of books: Biblical commentary, biography, fiction, cookbook, memoir, VBS curriculum, church resources, evangelism, and more. It’s not surprising that MennoMedia produces such a broad range of resources, but something about seeing it up-close and personal drove home for me how many of the books I grew up reading and interacting with were produced by MennoMedia.

Toward the end of the summer, I participated in a couple of Skype meetings. I have nothing with which to compare it, but it was fun to see editors, designers, and others bouncing ideas off of each other about what cover to use on a book or talking about what projects they were working on. And even in the limited time I spent observing these meetings, I could see that they were friends; there was a certain level of camaraderie, a social aspect that I wouldn’t have anticipated. This was a new perspective for me; whenever I pictured myself as an editor, I saw myself sitting in front of a computer, writing comments on manuscripts and sending them off – something very solitary. But these people were almost like a family. And whatever I end up doing, I’d love to have that sense of community in the workplace.

So was the experience what I expected? Yes and no. Were parts of it boring? Totally. Am I loving how much I learned and how much I enjoyed it? Absolutely. It was time well spent, and wherever life takes me, I’m glad to have had this experience. 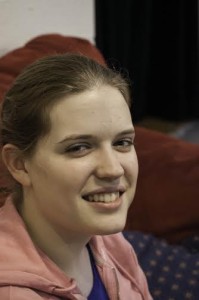 Luisa Miller is a junior English and music major at Eastern Mennonite University. A member of Slate Hill Mennonite Church in Camp Hill, Pennsylvania, she is spending the fall semester in China.

Internships–normally for academic credit, are available on a case by case basis and are individually arranged over summers or the school year. Must have strong recommendations of professors or an academic department.