Elementary school and I just didn’t get along. I attended a strict parochial school, with dour teachers who were not content to simply educate me; they were determined to adjust my attitude as well. I was a free spirit who stared out the window a lot, longing for summer vacation and the release that it granted both my physical self and my unbridled imagination.

One day, we were all called into the gymnasium for a special message from the principal. He spoke with much authority about a small community somewhere in Africa which needed our school’s help. He described the terrible conditions in which children “over there” lived and how he wanted us to raise money over the next two months to help them have a better life.

I was excited, that is until he said that we would be raising money to build a school. “What? How horrible,” I thought, and vowed then and there that I would not be a party to destroying the freedom and happiness of any other child. As we filed out of the gym, we were each handed a small box which the principal instructed us to keep on our desks and contribute to as often as possible. The boxes would be collected two months hence.

While my classmates eagerly went about doing chores and other activities to raise money, dutifully depositing their nickels and dimes in their boxes every day, I pretended to be taking part without contributing one red cent. 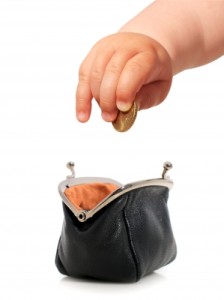 One day the principal announced over the loud speaker that it was time to collect up the money we had raised. As my classmates brought their boxes up to the front, each one jangled with change as it landed on the teacher’s desk with a thud. When it was my turn, I carefully cradled my box in both my hands, implying that it was so full that I feared the bottom would collapse. My teacher gave me a very big smile as I tried to hide it amongst [sic] the other boxes. She smiled again and patted my hand because not only had I apparently raised more money than anyone else, I was making my contribution with a true sense of humility. I held my breath, hoping that the boxes would not be opened in the classroom. Luck was on my side; my subterfuge was never exposed.

A couple of months later, the United Way announced its annual campaign. A vibrant young woman from our local animal shelter (which was a United Way agency), came to our school to talk about how she and her team rescued and rehabilitated abandoned and abused cats and dogs. I was spellbound.

I ran straight home after school and emptied my piggy bank. I tore the cushions off every sofa and chair, plunging my little arms as far as they could descend into the upholstery, bringing a veritable treasure trove of coins to the surface. I did chores; I looked for coins on the street; I sold plums and peaches door-to-door. (I got in trouble for that later for taking them from the fridge without asking.) I was undeterred, determined that no little animal that needed help would be denied what this wonderful shelter had to offer.

Two weeks and a very heavy bag of coins later, I brought the money to school to give to the United Way. In the bag was a note that said, “This money is for the lady at the animal shelter who helps little animals be happy and free.”

That was the first time I gave and I will never forget it.

This is one of twelve thousand stories from donors about what inspired them to start giving. I found it in The 2014 Burk Donor Survey, Penelope Burk, Where philanthropy is headed in 2014, (Hamilton, ON: Cygnus Applied Research, 2014), p 3. Used with permission.

Money Image above courtesy of fantasista at FreeDigitalPhotos.net

If you would like to read more of Penelope Burk’s reflections click here to reach her blog.

Do you have a story to tell about a first or significant giving experience? If so, tell us about it in the comment section below.

If you are a resident of the U.S. and wish to donate to MennoMedia, Click here to donate with PayPal

If you are Canadian and wish to donate to MennoMedia, please click here. Your donation will be processed and receipted through Mennonite Church Canada.

Thank you for your support.