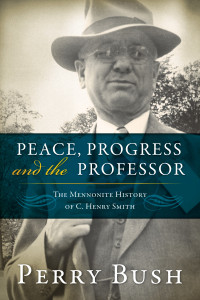 BLUFFTON, Ohio, HARRISONBURG, Va., and KITCHENER, Ont.—In the first half of the 20th century, Dr. C. Henry Smith wrote three books that were “the vehicles by which generations of Mennonites learned their history,” says author Perry Bush, a Bluffton University professor of history.

Now, nearly 75 years after the last of Smith’s histories of the Mennonites was published, Bush has written a biography, Peace, Progress, and the Professor: The Mennonite History of C. Henry Smith. Bush notes that Smith was a man who spoke to his times and ours, while modeling the emerging role of Mennonite public intellectual.

Published recently by Herald Press, Peace, Progress, and the Professor tells the story of a self-described “all-around Mennonite” who was raised Amish before becoming one of the first Mennonites to earn a doctorate, early in his 50-year teaching tenure in higher education.

After beginning his career at Goshen College, the native of Metamora, Illinois, spent the last 35 of those years at Bluffton. There, he also became a banker and a prolific public speaker who was a voice for Mennonite unity—and principles—while demonstrating a different way of being a Mennonite in the world, his biographer says.

Smith felt the Mennonites had “a tremendous tradition,” says Bush, the current successor to Smith’s legacy in the Bluffton history department.

“We have an Anabaptist orientation and an ethic that would be beneficial for others to hear,” Bush continues, paraphrasing his subject. “Let’s be out in the public sphere”—where increasingly, beginning in the mid-’30s, Smith extolled Mennonite values such as peace and justice while discussing public affairs with secular as well as church audiences, and even on regional radio.

Smith’s progressive bent early on convinced him that while Mennonites had much to share with the outside world, they shouldn’t be afraid to borrow from it, either. But he borrowed too uncritically at first, including the widespread racism of the time, although that was “never a major aspect of his thought,” Bush says. And after seeing the extreme anti-Semitism of Nazi Germany while in the neighboring Netherlands for the 1936 World Mennonite Conference Assembly, Smith wrote about its “un-Christian nature,” he adds.

An earlier, “major watershed” for Smith was World War I, when he witnessed persecution of U.S. Mennonites who spoke German and, as pacifists, didn’t buy war bonds, Bush points out. A Democrat who had backed the war, he turned a more critical eye toward acculturation afterward. By the late ’30s, he was writing of the dangers of a totalitarian state and that Franklin Roosevelt was leading the United States into war, leading him to vote for Wendell Wilkie, FDR’s unsuccessful Republican opponent, in the 1940 election.

He always believed, however, that exposure to, and adoption of, Mennonite ideas could help North American society—and that Mennonite unity was a goal worthy of ongoing pursuit.

Smith lived much of his adult life during “contentious times in the church,” Bush says. A hierarchy in the church began enforcing “proper” Mennonite behavior, including dress codes. Resulting arguments about dress, theology, and what it meant to be a Mennonite in the modern world created divisions between traditionalists and progressives, and within district conferences and individual churches, Bush explains.

Smith was a leader of the Mennonite union movement, which sought to heal those divisions in part through biennial All-Mennonite Conventions. In 1925, he chaired and gave the keynote address at the convention in Nappanee, Indiana, where he called for toleration in the church.

He said toleration didn’t mean anyone had “a right to teach and practice what he pleases though it may be destructive of the principles of the church.” But neither is it “a one-sided virtue,” he cautioned. “It involves obligations as well as privileges. It demands that we respect the honest convictions of others even though we do not agree with them.”

Toleration was critical, he said, because, with it, churches could do good work together. “The great need of today among many Mennonites is not so much an absolute unanimity of belief and practice in all details, as a spirit of cooperation in carrying out a great constructive program of church activities which no group by itself is able to achieve.”

And he repeated the “crying need” for Mennonite unity. “What the Mennonite Church needs today above all else is that its broken body should be healed,” Smith asserted 90 years ago. “The beliefs which we have in common are of far more significance than those which separate us.”

Bush observes that with the church divided again, “Smith could have written that speech yesterday,” and calls Smith an important figure who has been neglected, including by Bush himself, despite their having lived and worked in the same place.

That common bond of Bluffton was “part of the attraction” to writing the book, Bush adds, also crediting its completion to support from the C. Henry Smith Trust, which aids projects promoting the Mennonite peace message.

The new book’s release will be celebrated at a banquet on October 17, part of a conference on Mennonite education that Bluffton is hosting October 16–18. Visit www.bluffton.edu/conference for more information on the event.

Peace, Progress, and the Professor is volume 49 in Herald Press’s Studies in Anabaptist and Mennonite History series, and is available for $39.99 in hardcover and $29.99 paper from Herald Press at MennoMedia at 800-245-7894 or www.MennoMedia.org, as well as at bookstores.