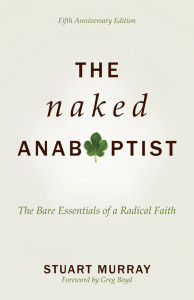 HARRISONBURG, Va., and KITCHENER, Ontario—Five years ago, Stuart Murray’s book The Naked Anabaptist made waves with its look at the central beliefs of Anabaptism and their relevance for Christians today. Now Herald Press has released a new edition of the book, drawing in stories and perspectives from North America and the global church.

The Naked Anabaptist: The Bare Essentials of a Radical Faith examines seven core convictions of Anabaptism, looking beyond the traditions of Mennonite, Amish, and other historically Anabaptist groups to the development of this Christian tradition rooted in Jesus and his teachings. It shows an alternate, healing path from the temptations of societies mired in materialism, individualism, nationalism, and state violence.

Murray, chair of the Anabaptist Network in the United Kingdom, originally wrote The Naked Anabaptist primarily for a British audience unfamiliar with Anabaptism. “I was very surprised by the interest among North American readers,” he said. “This revised edition is oriented more to North America, with examples of the application of Anabaptist convictions in this context.”

The new edition features an updated resource section on Anabaptism. Murray expands and updates his definition and discussion of Christendom, the historic melding of church and state that 16th-century Anabaptists reacted against as they sought to return to a biblical vision of voluntary belief and church membership.

Like the original edition of The Naked Anabaptist, this revised edition reaches out to seekers and to any Christian hungry for a biblical faith rooted in Jesus. Murray steps away from the ethnic understandings of church that have sometimes become part of historically Anabaptist groups, turning instead to Anabaptist biblical understandings that have sparked interest from the emerging church movement, historic denominations, and new Christian movements.

In The Naked Anabaptist, Murray does not call for shifts in Christian denominational allegiance. Instead he shares the values of authentic discipleship, heartfelt worship, sacrificial service, simple living, and radical peacemaking that he finds in historic Anabaptist beliefs and at the heart of Jesus’ gospel vision.

Murray calls for Anabaptist churches to recover a missionary and evangelistic vision for the future. In societies that are both increasingly secular and multifaith, the Christian challenge is to learn afresh to tell the story of Jesus and his teachings, Murray says. Like the original edition of The Naked Anabaptist, this revised edition helps provide Christians with some of the historic tools for that present-day task.

Murray has a PhD in Anabaptist hermeneutics. He is the founder of Urban Expression, an urban church planting agency with teams across Great Britain, the Netherlands, and the United States.

Gregory A. Boyd, pastor of Woodland Hills Church in St. Paul, Minnesota and author of The Myth of a Christian Nation, writes in the foreword to The Naked Anabaptist, “Murray offers this dialogue not to try to get people to join the Mennonites or any other Anabaptist group but simply because it’s to the advantage of both Anabaptists and the rising tribe of kingdom people to learn from and support one another.”

Join an active and semi-moderated Facebook Group, The Naked Anabaptist: The Bare Essentials of a Radical Faith.