The story(ies) behind Thanksgiving
by Melissa Miller

It is a season of Thanksgiving in North America, just past for Canadians, upcoming for those in the States. Given that I have roots in both countries, I celebrate the season over a stretch of two months, mindful of many blessings. Savoring the colored leaves and the migrating geese, I take in the foods of autumn: apple cider, squash soup, pumpkin pie. 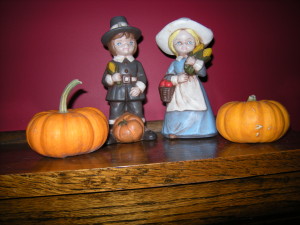 These two figurines are pulled from storage, and keep vigil in a seasonal display. They were a gift from my mother’s creative hands early in my marriage, and have followed me around from house to house, tying me to my roots, as well as the initiators of the first thanksgiving. More recently, they are a disturbing reminder that the holiday celebrated across two countries is a story told with a slant.

From childhood, I learned of the First Nations people who welcomed the European settlers. I learned that the first thanksgiving was a meal shared by indigenous people and the Pilgrims from England. I learned that the settlers were grateful that they had survived the previous months, grateful for the kindness shown by their native neighbors, and grateful for God’s providence. All sounds good, right?

More recently, I have glimpsed what was missing in that version of the first thanksgiving. The story was told and continues to be told from the perspective of my ancestors, the pale-skinned Europeans. Missing from the happy gatherings around heavily laden tables are the laments of the deteriorating relationships between indigenous peoples and settlers. Of the prejudice and violence towards aboriginals that has marked those relationships. Of the struggles of First Nations people today to obtain adequate food, water and shelter in the lands they have inhabited for centuries. Literally, I feast (in a warm and comfortable home, with food, stable relationships, economic security, and the privileges of education) while many of the ancestors of the First Nations people languish. 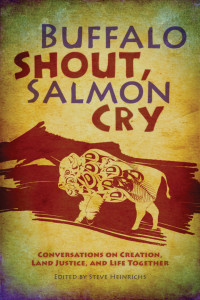 Buffalo Cry, Salmon Shout (Herald Press, 2013) is one resource that sheds light on the hidden stories. Edited by Steve Heinrichs, “…Buffalo Shout, Salmon Cry offers up alternative histories, radical theologies, and poetic, life-giving memories that can unsettle our souls and work toward reconciliation.” (As described in the MennoMedia store.) 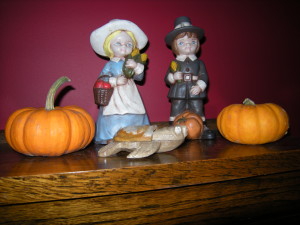 stories that are told, if we include more perspectives as we reflect on the season. I think my pilgrims need to have some indigenous peoples join them in the display. For now, I’ll include a stone turtle given to me by a native friend this past summer. She told me it was a sacred item and that I should keep it in a holy place. Its presence helps me to be mindful of the untold stories behind Thanksgiving.

Melissa Miller is a pastor from Winnipeg, Manitoba, longtime columnist for Canadian Mennonite, and secretary of the MennoMedia board.

How will you work at including layers to your Thanksgiving stories? At home? At church?