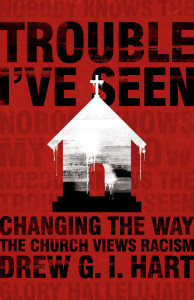 Book on racism and the church attracting acclaim

HARRISONBURG, Va., and KITCHENER, Ontario— What if racial reconciliation doesn’t look like what you expected?

In a provocative new book, Trouble I’ve Seen: Changing the Way the Church Views Racism, theologian, former pastor, and blogger Drew G. I. Hart places police brutality, mass incarceration, anti-black stereotypes, poverty, and everyday acts of racism within the larger framework of white supremacy. With a foreword by reconciliation scholar and author Christena Cleveland, Hart challenges Christians with an honest look at injustice while offering churches concrete practices for living faithfully in a racialized society. The book will be published by Herald Press on January 19, 2016.

The book blends stories, theology, and social analysis, and has already received a positive review by Publishers Weekly, the trade magazine of the publishing industry: “In this emotionally wrenching yet accessible book, Hart provides an overview of systemic racism in the U.S. today, as well as the responses of Bible-based Christian theology. The book is a savvy and balanced blend of topics that should serve as a useful introduction for Christians of all races.”

Englewood Review of Books has named it to the “Top 50 Books for Christian Readers to Watch for in 2016” and Publishers Weekly placed it on their list of African-American Interest Adult Titles for 2015-2016.

In Trouble I’ve Seen, Hart looks at the high-profile killings of black men and women in recent years by police officers, and the protests and violence that have ensued. “These events have convinced many white Christians to reexamine their intuitions when it comes to race and justice,” Hart says.

Hart argues that white Christians have repeatedly gotten it wrong about race because the dominant culture has so thoroughly shaped their social intuitions and assumptions. He also challenges black Christians to not neglect the most vulnerable in their own communities. Hart offers practices for churches that seek solidarity with the oppressed and are committed to racial justice by pointing to the example of Jesus.

“This book is a conversation with the church to help us understand race and racism better than we currently do,” says Hart. “It challenges us to respond more faithfully to our current racialized moment, considering how Jesus-shaped lives can transform us and our witness in society.”

Efrem Smith, president and CEO of World Impact, finds that “Hart makes a courageous and compelling call to the church to get on the road to racial reconciliation and righteousness.”

Herald Press managing editor Valerie Weaver-Zercher says, “This prophetic, practical book is for anyone who is saddened or angered or baffled by the racialized society that shapes all of us. Drew is a compassionate and incisive guide, giving us tools for understanding our times and for aligning with God’s transformative work.”

Hart is a PhD candidate in constructive theology and ethics at Lutheran Theological Seminary at Philadelphia, with 10 years of pastoral ministry experience. An adjunct professor at Biblical Theological Seminary in Hatfield, Pa., Hart regularly speaks at churches, conferences, and colleges. He writes a blog hosted by Christian Century titled, Taking Jesus Seriously and has contributed to other publications including  A Living Alternative: Anabaptist Christianity in a Post-Christendom World, Sojourners, and The Mennonite.

Trouble I’ve Seen: Changing the Way the Church Views Racism is available for $16.99 at www.heraldpress.com as well as local bookstores and other retail websites.