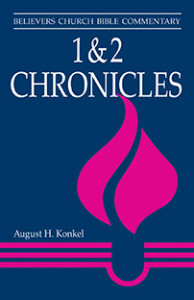 HARRISONBURG, Va., and KITCHENER, Ontario—Readers might skip over 1 & 2 Chronicles on their way to better-known biblical books. If they do, August H. Konkel thinks they are making a mistake.

Konkel, professor of Old Testament at McMaster Divinity School, is the author of 1 & 2 Chronicles, the 30th volume in the Believers Church Bible Commentary series.

Chronicles offers a lot to today’s church, Konkel believes. “The main theme of Chronicles is hope,” he says. “If we are faithful to our calling, then the hope God gave to David and his people is realized.”

The Chronicler wrote a history that starts with creation and carries the story of his own people up to his current time. Writing at the time of the Persian Empire, after Israel’s return from Babylonian exile, the Chronicler offered encouragement to the people of his small nation.

As in all volumes of the Believers Church Bible Commentary series, 1 & 2 Chronicles includes tools such as sections on “The Text in the Biblical Context” and “The Text in the Life of the Church.” Here Konkel connects the Chronicler’s stories of faith and exile, of struggling to rebuild, to the life of believers past, present, and future. “This story should inspire us to be faithful to the calling God has given us,” he says. 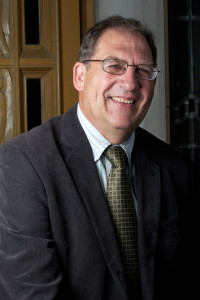 Konkel relates the story of his own Mennonite Brethren grandparents, Ukrainian refugees in Canada who were defrauded by their land agent and who lost multiple children while farming in Saskatchewan. “Their faith was their strength, carrying on through tragedy,” he says. In the commentary, he looks at key Anabaptist figures of the Reformation. The story of faithfulness in struggle has many applications across the international church today. “It parallels us, who we are, the road ahead; this is the calling we need to be faithful to,” says Konkel.

Each Believers Church Bible Commentary includes a variety of theme essays. The 1 & 2 Chronicles commentary looks at how the Chronicler treated warfare in his account. Konkel addresses how and why we write history, and suggests the purpose is not so much what happened in the past as how the past has affected our situation today.

Other essays examine how ancient authors worked to compose biblical books, the idea of promise to David, and how Chronicles relates to other Old Testament books, such as Ezra and Nehemiah.

In addition to teaching at McMaster Divinity College in Hamilton, Ontario, Konkel is president emeritus of Providence University College and Theological Seminary in Otterburne, Manitoba. He also was instructor in Old Testament at Providence and has served as a pastor. He is the author of commentaries on Job and on 1 & 2 Kings in other commentary series.