I am a first generation Mennonite. I grew up Presbyterian, coming to faith at an early age. As a young man, I followed my father and brother and served in the U.S. military. My father enlisted in the Army and served in the Air Corp during WWII.

My brother was a Naval Reserve Officer Training student at the University of Virginia before being commissioned an Ensign in the US Navy. I too followed their path and became an officer in the US Coast Guard, retiring with 20 years of service including three tours at sea.

I came to the Mennonite Church through the influence of Myron Augsburger and others at Washington Community Fellowship, an inner-city church on Capitol Hill, started in 1981.

During the past decade and a half, I have been gathering pieces of my parent’s history and putting them on paper. I also just finished reading Song of the Redwing Blackbird, the self-published memoirs of Fern Lapp Bowman, a local Mennonite woman who grew up Amish Mennonite. Our parent’s history shapes our lives. It informs who we are and what we will become. It matters. Because of this we want to entrust our history to our children and grandchildren.

As a persecuted and immigrant community, many Mennonites seem particularly interested in preserving their collective history. As MennoMedia’s Director of Development and Church Relations, I travel extensively in the US and Canada. Everywhere I go I visit archives and historical displays. Recently I explored the Illinois Mennonite Historical Society in Metamora, Illinois. I was given a tour of the expansive facility by Director Julie Hendrick. She too was raised Presbyterian and has now embraced the Mennonite faith. The center’s collection is housed in three buildings: a restored Sutter barn, site of the Amish Mennonite Conference of 1875; a fascinating Schertz Grossdawdy (grandfather) House, restored and furnished in the style of the early 20th century when Christian and Magdalena Schertz lived there; and the main building which houses an extensive library and genealogical records along with a display upstairs.

Visitors are oriented to the history of Illinois Mennonites with a brief introductory film. Like most of the North American Mennonite History centers I have seen, this one operates with lots of volunteer help and minimal staff.

MennoMedia and Herald Press play an important role in preserving the collective history of Mennonite. To that end, on May 24, 2016 we will release In Pursuit of Faithfulness: Conviction, Conflict, and Compromise in the Indian-Michigan Mennonite Conference, written by Rich Preheim. 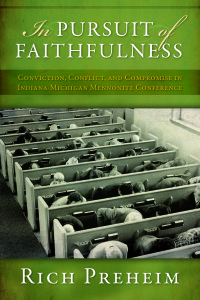 This is the fiftieth volume in the Studies in Anabaptist and Mennonite History series which began in 1929 with Harold S. Bender’s Two Centuries of American Mennonite Literature. The series is sponsored by the Mennonite Historical Society. Some other titles include: C. Arnold Snyder’s The Life and Thought of Michael Sattler, 1984; John Ruth’s The Earth is the Lord’s, a history of Lancaster Mennonite Conference published in 2001; and last year’s volume—Peace Progress and the Professor: the Mennonite History of C. Henry Smith by Perry Bush. 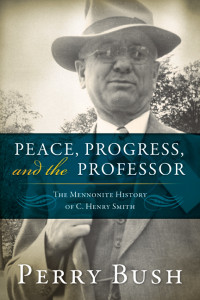 MennoMedia is largely known as the home of Herald Press books, Shine Sunday school curriculum and the Third Way dot com website. However, the Studies in Anabaptist and Mennonite History series is another important piece of our work.

Thank you for engaging with MennoMedia here a blog reader. I hope you will also engage with us as a book reader, in prayer, and as a financial supporter. To donate to MennoMedia click here.

Blessings in your work, worship and witness,
Steve Carpenter