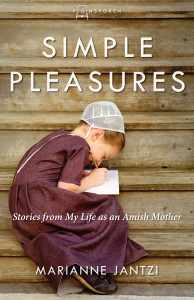 Today is the official launch day for a new Herald Press book! I’m almost as excited as I would be if it were one of my own books launching. Simple Pleasures: Stories from My Life as an Amish Mother is now available for sale—and the pre-orders for early birds are on their way to customers!

Marianne Jantzi has four very young children—her youngest will be just a year old in April, the oldest is eight. And despite the differences which most mainstream Mennonites or Christians have in the way of dress or lifestyle, (the Amish still dress pretty much like they lived in the 1700s), you and I have much in common with Marianne Jantzi. These things likely apply no matter your color of skin, faith, or nationality.

I enjoyed working with Marianne almost like she was a daughter, giving her tips for how to take her magazine columns (from The Connection) written about specific happenings over a five-year-period, and take away the specifics so they will be “evergreen.” We compared children (and my grandchildren) and agreed how precious morning writing times are—squeezing in one more sentence or paragraph even after you’ve started hearing morning-wake-up noises coming from one of the bedrooms.

In addition to gardening, cooking, canning, making most of their own clothing, using a gas powered washing machine and outdoor clothes line even in harsh Ontario winters—Marianne and her husband run a shoe store—the Jantzi Shoe Box—in their “spare” time. Her husband also works at a job away from their home, so they are busy indeed raising their family and providing for needs.

I admire Marianne for taking on this additional challenge of writing a book without a typewriter, computer or anything mechanical/technological. 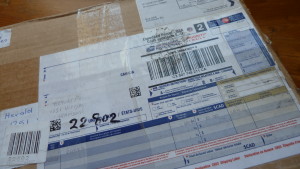 This is the box in which part of her manuscript arrived. 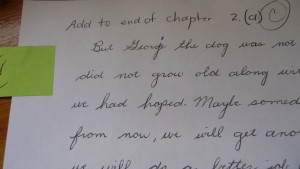 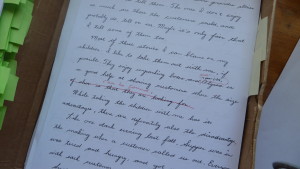 Here are some of Marianne’s original handwritten pages.

We communicated by letter, voice message, and telephone. As many people know and understand, among some Old Order and other plain groups, telephones are allowed for business purposes and when shared with others. The Jantzi phone is shared with three other families or businesses, which helps to preserve the idea of depending on one another and not going one’s own way or allowing technology to infringe on interdependence and community. That’s a short answer; whole books have been written on the topic, including one by my former colleague, Diane Zimmerman Umble, Holding the Line: The Telephone in Old Order Mennonite and Amish Life, Johns Hopkins University Press, 2000.

If Marianne were not Old Order Amish, she could easily host a popular and well-visited “mommy blog.” As her editor for this book, I hope I have been a bit of a mentor and encouragement, just as I try to be that for other young women and my own daughters. As women we sometimes seem wired to want to learn from our moms and older sisters and friends (and maybe teach others)? I wrote recently about Marianne with two excerpts from her book in my Another Way newspaper column published on Third Way website and in seven or so papers across the U.S. and Canada.

But this book—as with anything our daughters or sons attempt—is Marianne’s own work, her own new baby—and I wouldn’t take that away. This moment for Marianne is her time to cherish a dream many never realize or complete: having a book printed, marketed and published by a traditional publisher—(not self-published). She told me that when her author box of books arrived recently (yes, authors get the first copies!), one of her sons opened the box before she could and promptly wrote HIS name in HIS copy in big bold letters. I loved that additional story!

If you are a mom—or know a mom—or have a mom—you or they will likely enjoy reading—and comparing the ups and downs of this young Amish mom in Simple Pleasures. You may have much more in common than you ever imagined possible. 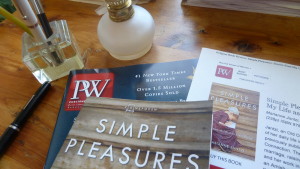 Publisher’s Weekly, the key magazine for the entire secular/religious publishing industry included a review of Simple Pleasures. We’re very excited and love the part which says “Provides insightful reflections on mainstream culture and how Amish life is both an escape from those pressures and a challenge. . . . Readers looking for a glimpse into Amish life from a charming voice will be pleased.” See more here: Publisher’s Weekly.

You can also still enter a Good Reads giveaway which ends tonight (March 29, 2016) at midnight, if you enjoy Goodreads!

Jalynn Patterson reviewed Simple Pleasures on Goodreads: “We see the Amish and we are enamoured by them. They seem to exist happily serving their God and their community . . . I myself, have said numerous times that I wish I could live as simply as they do. When you are on the outside looking in, things with them seem virtually effortless, but this is far from the truth. Simple Pleasures is a book that shows the world that the Amish live a lot like we do. As I read Marianne’s words I realized that we are very much alike and I was grateful in a way to see that she as I am is just a mom trying to survive in this world and it was all good. She wants to be the best “me” she can be while serving her one true God as well as her family. Simple Pleasures is a breath of fresh air! Its simplicity is equally beautiful as it is normal. I enjoyed this read, tremendously!”