It is not every Mennonite who gets a “Hall of Nations”—filled with international flags—named after him or her at a Mennonite college. After all, this particular Mennonite died back in 1977, so his donating days are over, which is usually how you get things named after you. 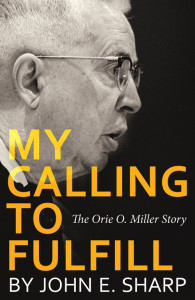 Of course this particular man, Orie O. Miller, donated many many dollars and even more hours to multiple Mennonite institutions that he helped start, all documented with fascinating detail in the Herald Press biography published last year, My Calling to Fulfill: The Orie O. Miller Story, by historian John E. Sharp. 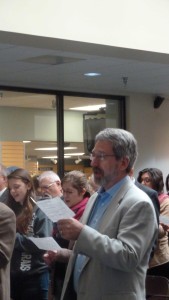 Almost one hundred years ago, in 1919, Orie was in the first group of nine Mennonite relief workers who went by ship to help refugees in Syria and Lebanon. This propelled him to later explore how Mennonites could help those suffering in Russia after World War I, and he eventually completed some 100 ocean crossings by boat for relief or mission work (before air travel).

The Orie O. Miller Hall of Nations was dedicated last week at Eastern Mennonite University as part of an Anabaptist Leadership Conference. I did not want to miss the service. Ever since I was a little girl I remembered my Mennonite-deacon-father quoting Orie Miller about this, or telling us how Orie Miller had begun that. Like thousands of others of his World War II Mennonite generation, Dad absorbed and conveyed to us the urgency of upholding and teaching peace as a lifestyle to later generations. Dad served four years in Civilian Public Service, the alternative to military service which Orie helped to establish with the U.S. government, because of deep and true understandings that Jesus would not have wanted them to fight in any war. 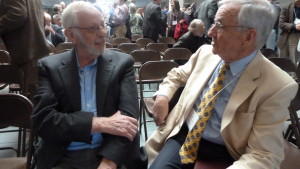 Edgar Stoesz, on MCC staff for 33 years, chatting with Dr. Lee M. Yoder after the service

I was not disappointed in the dedicatory gathering. I got to hear folks like Edgar Stoesz, who is one of the few living leaders who actually worked with Orie at Mennonite Central Committee at the Akron Pa. headquarters (their working paths crossed there only one year). MCC of course is one of a string of organizations Orie helped begin. Edgar told stories of the kind former co-workers tell, like the time Edgar grew a mustache. NO one liked Edgar’s mustache, least of all his wife, and eventually Edgar admitted it just didn’t work on him and shaved it off on a business trip. Orie, who was sometimes criticized for being stern or humorless, was speaking with Edgar at Edgar’s desk after he returned from his trip. At the end of the conversation Orie started to walk away and then turned, came back, and said “I had to see whether it was gone, or did I just wish it gone?”

Dr. Lee M. Yoder, former EMU vice president and currently chair of the Anabaptist Center of Religion and Society at EMU gave background on how the idea for an Orie O. Miller Hall of Nations came about. Yoder had worked in several international settings where national flags had been used to not only signal international interest and cooperation, but serve as a welcome and affirmation for persons from around the globe—in this case, learners coming to EMU whether as undergrads, grad students, or Summer Peacebuilding Institute (SPI) participants.  This hall of colorful flags will certainly be a bright spot of welcome to SPI students and outstanding peaceworkers like eventual Nobel Peace Prize winner Lemayah Gbowee.

Edgar Stoesz gave some advice looking at the example of persons like Orie Miller and Mother Teresa, regarding what one person can do to change the world. If we sometimes wonder about the futility of one person ever doing anything to really make a difference, Edgar encouraged his audience, “Throw back your shoulders and say, ‘I am that person, God helping me.’” 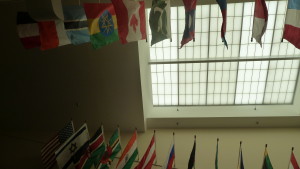 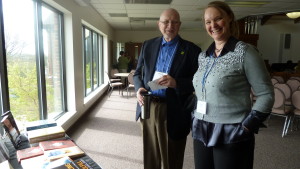 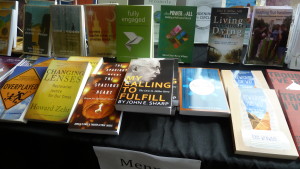 Some of the books on sale at the Anabaptist Leadership Conference included: Overplayed, Changing Lenses, The Spacious Heart, My Calling to Fulfill, Setting the Agenda, Rewilding the Way, Trouble I’ve Seen, the Christians Meeting Muslims series, The Power of All, Fully Engaged, Widening the Circle, Living Thoughtfully Dying Well, Teaching that Transforms, and more.

You can purchase My Calling to Fulfill here.

Those interested in sponsoring additional flags for the Orie Miller Hall of Nations at EMU can check information here or contact Ben Bailey directly.

Melodie Davis, a managing editor at Herald Press, is 2/3 of the way through reading My Calling to Fulfill and plans to give a more thorough review of the book at her blog www.findingharmonyblog.com.