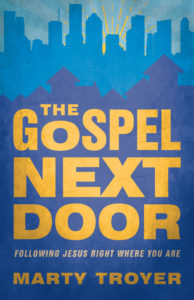 HARRISONBURG, Va., and KITCHENER, Ont.—God is at work and the gospel is alive in our cities, towns, and communities. This is the message Marty Troyer wants to share in his new book, The Gospel Next Door, released by Herald Press.

As a pastor in Houston, Texas, Troyer has found the gospel to be thriving in the city. “People are sharing Jesus, pursuing shalom in the city,” he said in an interview. The old division of evangelism and social justice breaks down as Christians combine these in life-giving ways, he said.

In addition to pastoring Houston Mennonite Church, Troyer writes a blog hosted by the Houston Chronicle. Titled The Peace Pastor, it emphasizes a gospel-centered Jesus ethic.

In The Gospel Next Door, Troyer writes about the gospel message through the lenses of following Jesus, making peace, and overcoming injustice. “Jesus is the center, and it ripples out from there,” he said.

Finding God’s work in the world starts with spiritual tools, Troyer points out. It is rooted in Scripture and good worship. “A good hymnbook is one of the greatest tools for justice we have,” he noted.

As a church reaches out in its community, it finds others working for God’s kingdom. “This is a mosaic of stories,” Troyer said. “We Mennonites don’t have a corner on the God of peace. So many people share those values and that passion.”

In his new book, Troyer recounts stories of Houstonians whose faith in Jesus drives their work: against violence in their neighborhoods, for Habitat for Humanity, against human trafficking. “The church is the one staring into the darkness and working for change,” he said.

“My pen pal Terrence went into prison at age 12 and is now 38 and still behind bars,” said Troyer. “In Houston prison ministries and restorative justice, the church is leading the way.” Christian ministries are addressing overcrowded prisons, mass incarceration, and racism.

Partnering and praying with different Christians clarifies our language about the gospel, Troyer believes. “Personal faith has come alive as we opened our doors and eyes to the rest of the church,” he said.

Troyer hopes readers will discover broader church partnership. “The world is hungry for God. They don’t see it in the church regularly, so they are excited about it.” He believes churches need to stop working alone and engage publicly, talking with and listening to more people.

Troyer makes the point that The Gospel Next Door is not about one pastor and one church. “We are one piece of the mosaic,” he said. His book starts to put together the mosaic of the gospel happening in Houston, Texas—one example of God’s kingdom in action.

Margot Starbuck, award-winning author and speaker, says of The Gospel Next Door, “The world God loves, the one Jesus died for, is right under your nose, and you won’t see it the same way after reading this book.”

Dwight Friesen, coauthor of The New Parish and Routes and Radishes, and author of Thy Kingdom Connected, writes, “Troyer paints a picture of what loving God as loving your neighbor can actually look like in the everyday stuff of life—part of a large and growing movement of Christians rediscovering the practices of ‘local church.’”

Marty Troyer is the author of The Gospel Next Door, which has just been released by Herald Press. Troyer is the pastor of Houston Mennonite Church in Houston, Texas. His blog, The Peace Pastor, has been hosted by the Houston Chronicle for five years.

Tell me about your title: The Gospel Next Door. What’s different about the “gospel next door” from the gospel anywhere?

That idea is really central to the book. We’re not taking something where it isn’t. The gospel is already alive next door.

There are people in our cities living for the gospel whom we’re not aware of. We’re not alone. Maybe particularly as Mennonites, we don’t have a corner on the God of peace—so many people share those values and that passion. This means something is already happening that I’m invited to.

Are you addressing the church in the city primarily?

Yes and no. I focus on one city. I hope people will see this in their own context. My examples are widely applicable in other places. I’m really passionate about being local—not just for an urban audience, but out of an urban context. I’m telling stories about a particular place as illustration.

Your book sections talk about the gifts of Jesus, of peace, and of restoring justice. What is significant about those gifts in a community?

The gospel helps us to see more clearly. I’m fleshing that out in those three directions. The book is centrally about Jesus. To understand Jesus, we have to understand shalom and justice. I love Paul’s language: that God is able to accomplish abundantly far more than all we can ask or imagine. Jesus is the center and it ripples out from there.

In Houston, I see the church at work, stories of people sharing Jesus, pursuing shalom in the city. That’s one of the real stories in the missional movement, that ministry is kingdom work and for the common good, rather than the old dichotomy of evangelism or social justice. Here people are combining those in a really life-giving way.

How do you see that happening in Houston?

I tell a mosaic of stories, about groups, individuals, and families who are not part of my church—people who because of faith in Jesus have come to a stand of nonviolence; who are training high school youth to have different options from the military; who live in dangerous or impoverished neighborhoods; who because of faith are working against violence. These are not just fantastic stories, they are game changers for the church.

The book is also about justice, which includes everything from a church working with Habitat for Humanity to a local organization called Bridges for Life that works between victims and offenders. I think of my pen pal Terrence, who went into prison at age 12 and is now 38 and still behind bars. In Houston prison and restorative justice ministries, the church is leading the way. We have overcrowded prisons, mass incarceration, and at every point along the way Christian ministries are addressing the criminal justice system. It’s impressive what the church is doing.

The same for human trafficking. Of the worst six cities in the U.S. for human trafficking, Houston is number one. Julie Waters first heard about human trafficking in church, and she pursued a law degree to create a ministry—and we must put this in the context of multiple ministries and years-long work. The church is the one staring into the darkness and working for change.

When you see this mosaic together, you see there is a church in Houston, and it’s the whole “big C” Church.

What are ways for churches to connect into the larger church?

There is so much happening. There are few ministries that need to be created by churches or small groups. Almost always, there’s another organization to partner with or to join. Instead of saying, “Here’s a problem, we need to create a ministry,” say, “Here’s a problem, maybe the gospel helps us to see it. Check it out, people have built something already to address this.” We need to help energize what’s already happening.

We then can respond differently, not with guilt or burnout. When you are able to say that the gospel is already working, people come alive and can do more by referring them to the ministry that is already there.

You pastor a church in Houston. How has that shaped your understanding of the gospel message in our home communities?

It has shaped my understanding of the gospel in different ways.

One is that in opening ourselves to the outside world, we open to the diversity of Christian streams and spirituality. Richard Foster has written about the six streams of Christianity. My church and maybe many Mennonites are in one of those streams. As we partner with other people, as we sit down and pray with people from different Christian streams, it opens our eyes. It clarifies our language about the gospel. It’s a really beautiful thing—personal faith has come alive as we open our doors and eyes to the rest of the church.

We have transformed as a church by stopping believing the myth that we are the only ones in Houston who care about peace. We are not the only pacifist church, or the only ones opposing the death penalty. We partner with groups who express that difference. We are deeply energized by the fact that we are not alone in Houston.

What tools can we use to find the work of God happening in our communities?

My chapters in the book help provide those tools. Some are spiritual tools—not just trying to Google things on the computer. To see what God is doing in our context, we must be rooted in Scripture and worship. A good hymnbook is one of the greatest tools for justice we have. Then we let that ripple out into our communities. How is God the God of Exodus and of Revelation today?

We need to look from the bottom up, not the top down. We need to look at race. For faithfulness to flourish, we have to take seriously immigrants, refugees, and minority communities. Reading the Bible with the lens of Black Lives Matter. There are two different Houstons. One is white middle-class. But you also must see Houston through the Fifth Ward or through pastors in black churches. You have to see it through the eyes of the incarcerated.

We Mennonites don’t have to recreate the wheel; we can go back to those things that were brilliant. For example, Mennonite Central Committee, which was built on deep relationships, Mennonite Disaster Service, Ten Thousand Villages, and Christian Peacemaker Teams. These are effective communal organizations, not just birthed by one person—they are deeply communal things.

You have a blog, The Peace Pastor, hosted by the Houston Chronicle. How has that been part of your church’s outreach?

I’m a public theologian. A key reason for the book is not just my work but my congregation—we are putting ourselves out there in a public way. This reaching out has formed the book, how we discovered partnership and the people we are connected to now. Through the blog, I became aware that there’s a deep hunger in the world for the Anabaptist Christian way of being. The world is hungry for God; they don’t see it in the church on a regular basis, so they are excited about it. There are lots of Anabaptist-minded people. It opens doors to relationship.

Our church is one story among many. We are one among maybe 12 churches and 20 organizations and 15 families that I write about. We are one piece of the mosaic.

My goal is really to showcase the best in this community. What’s really central is that grace is the hinge between the inner life of faith and the outer life of love. It is a personal grace-filled relationship, but also outward.