Bread for the Journey launches in conjunction with theatrical production 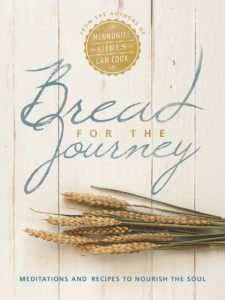 HARRISONBURG, Va., and KITCHENER, Ontario—In a gift-style volume, the women who contribute to the popularity of the Mennonite Girls Can Cook blog and cookbook series have authored devotionals, recipes, and family stories for a new devotional book.

Bread for the Journey: Meditations and Recipes to Nourish the Soul is a hardback collection of 90 meditations. (The new title is also available as an ebook.)

The meditations, all drawn from promises in Scripture, focus on helping readers strengthen their relationship with God by savoring everyday moments. Interspersed with the devotionals are dramatic family stories and favorite recipes, inviting users to extend their tables in hospitality and share God’s blessing with others.

“Bread for the Journey will minister to every part of you: body, soul, and spirit. Every woman needs it!” writes Linda Dillow, author of Calm My Anxious Heart and Satisfy My Thirsty Soul.

Janice Dick, novelist, says, “Between the beautifully bound covers of Bread for the Journey lies a collection of life lessons, from everyday occurrences to miraculous deliverance: pictures of faith, forgiveness, and hope.”

This is the first book release from the Mennonite Girls since 2013, timed to coincide with the opening in the United States of comedy production by Blue Gate Musicals, Mennonite Girls Can Cook!

The producer of the comedy is Dan Posthuma, president and executive producer of Blue Gate Musicals; script writer is Martha Bolton, a former comedy writer for Bob Hope along with hundreds of other shows, including five hit Broadway-style musicals about Mennonites or Amish. The Mennonite Girls comedy is a one-act play and centers on a small-town cable TV cooking show, hosted by two Mennonite women, that attracts the attention of a Hollywood producer.

Lovella Schellenberg coordinates the blog and accompanying books, and lives in western British Columbia. Nine of the women live in Canada and one resides in the United States. They have appeared on numerous Canadian television segments, and donate all their author royalties to nourish children around the world.

For more information from Herald Press: