HARRISONBURG, Va., and KITCHENER, Ont.—Authors Dave King and Margot Starbuck will debunk myths about youth and over-participation in specialized sports teams on two upcoming programs of the Focus on the Family radio program with Jim Daly and John Fuller.

The programs will air September 15 and 16 on Focus on the Family, a worldwide radio show with an estimated global audience of 220 million. 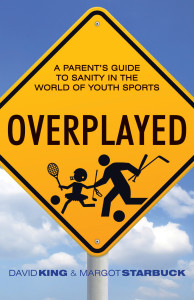 During the back-to-school season when kids are busily getting into sports, King and Starbuck offer guidance for parents from their book, Overplayed: A Parent’s Guide to Sanity in the World of Youth Sports.

King has been the director of athletics at Eastern Mennonite University in Harrisonburg, Virginia, since 2005. He and his wife, Deb, have three grown children and two grandchildren.

Margot Starbuck is a public speaker and author of seven books, including Not Who I Imagined, Permission Granted, and Unsqueezed. She is also a ghostwriter, an editorial adviser, a writing consultant, and a columnist for Today’s Christian Woman. Earlier King and Starbuck wrote about “Four Sports Lessons” in the August/September 2016 issue of Focus on the Family magazine.

Radio listeners who call and give a donation to Focus on the Family when the program airs will receive a free copy of Overplayed. A promo of the interview program appeared live on Facebook on August 15; the video has been viewed over 34,000 times.