HARRISONBURG, Va., and KITCHENER, Ont.—Many millions of people will never pick up a book or magazine about Mennonites or enter any Mennonite church. But they will drop in anonymously to Third Way website (thirdway.com) to get a quick glimpse of what Mennonites are about.

Erwin and Angela Rempel, who previously worked many years in 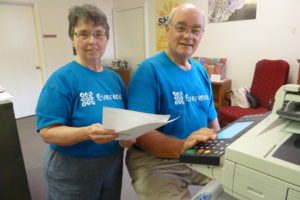 mission settings around the globe and for church agencies in the United States, volunteer for MennoMedia and responded to 60 to 70 email queries this past year, sometimes with multiple follow-ups. The site averages more than one thousand hits a day, nearing a third of a million annually. Third Way is one part of the media matrix offered by MennoMedia and its book imprint, Herald Press, based in Harrisonburg.

Six sponsors, Mennonite Mission Network, Everence, Abundance Canada, Mennonite Health Services, Conrad Grebel University, and Goodville Mutual currently help sponsor the all-free website, which was founded in 1998 to help dispel myths about Mennonites and to convey solid information. While a fluffier FAQ titled “What’s the difference between Mennonites and Amish?” gets the most clicks (146,000 this past year), the second most accessed section, “Key Teachings of Jesus,” is a meatier section that totaled 65,000 clicks this year.

The inquirers offer windows into the questions—and misconceptions—people still have about Mennonites. Here, in two lists, discover what people in the general public wonder about regarding Mennonites. (You might consider holding a small group or church school class discussion around these lists.)

Photo Caption: Angela and Erwin Rempel volunteer on the annual Everence Day of Generosity for MennoMedia, and year round answering questions at Third Way website.

For more information on this news release:

For a book with 50 common questions asked over the years, see Ask Third Way Café 50 Common and Quirky Questions About Mennonites by Jodi Nisly Hertzler.