Has the church changed the message of Jesus?
Pastor Bruxy Cavey unfolds the piety-smashing message of God in Reunion

HARRISONBURG, Va. and HAMILTON, Ont.—Is it possible that over the centuries the church has altered the message of Christ? Has modern Christianity wrapped itself so tightly in a fragmented, inactive version of the gospel that the life-changing message of God has been smothered? Canadian pastor Bruxy Cavey thinks the answer is yes. 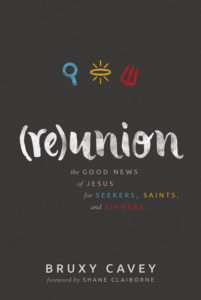 Cavey speaks to a new generation interested in Jesus but embarrassed by Christians in his latest book, Reunion: The Good News of Jesus for Seekers, Saints, and Sinners (Herald Press, May 2017).

“The message of Jesus changed the world . . . until the world changed the message,” says Cavey, bestselling author and teaching pastor at The Meeting House in Ontario, Canada. “But I’m happy to say that there is a growing movement of truth-seekers and Jesus-lovers who are calling for a return to the first and foundational good news message of Jesus. This book is inspired by them, and it is an invitation to join their ranks.”

In Reunion, Cavey explains why Christians shouldn’t follow the Bible—but why they will want to read it to learn how to follow Jesus. He encourages readers to discover their true citizenship in the Jesus Nation, where they might be ready to die for a cause but never willing to kill for one. 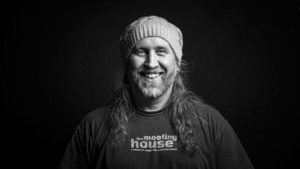 “One of the biggest obstacles to Christ has sometimes been Christians,” says activist and bestselling author Shane Claiborne in the foreword to Reunion. “We often look very unlike the Christ we worship. . . . Bruxy wants a Christianity that looks like Jesus again.”

The Meeting House is one of the largest churches in Canada, according to the Hartford Institute for Religion Research. More than 10,000 people per week listen to Cavey’s podcast teachings, and his talks and sermons on popular topics garner as many as 40,000 downloads per day. Cavey is also the author of the bestselling book The End of Religion.

Cavey describes The Meeting House as a church for people who aren’t into church. It is a multisite Anabaptist congregation in eastern Ontario where thousands of people connect with God and each other through Sunday services, online interaction, and a widespread house church network.

Cavey was a keynote speaker at Mennonite World Conference in Harrisburg, Pennsylvania, in 2015. Learn more about Bruxy at Bruxy.com and about The Meeting House at Themeetinghouse.com. Bruxy and his wife, Nina, have three daughters and live in Hamilton, Ontario.

The book releases May 9, 2017, in the United States as a hardcover with dust jacket at $21.99 USD. It is available in Canada and elsewhere as an international trade paperback at $18.99 CAN. Reunion is also available as an ebook.