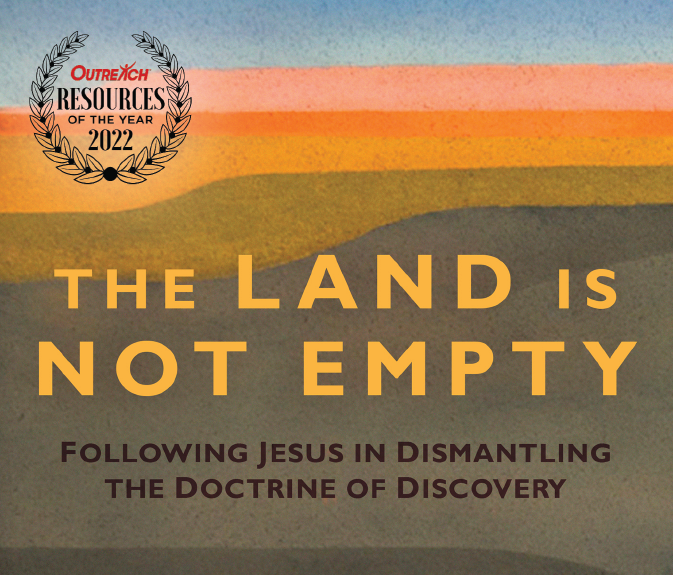 HARRISONBURG, VA — Outreach magazine selected The Land Is Not Empty: Following Jesus in Dismantling the Doctrine of Discovery by Sarah Augustine as an “Also Recommended” resource in the Social Issues and Justice category of their Resources of the Year. The book is featured along with the other selected resources in the March/April 2022 issue of Outreach.

The titles selected for Resources of the Year address issues in evangelism, apologetics, the church, leadership, social issues, and justice, among other concerns. More than 150 resources were submitted for consideration. An expert in each category evaluated the resources and chose what they considered to be the best.

“Sarah Augustine is an important voice in our society. We are proud of her work and thrilled that others like Outreach recognize her value as well,” said Amy Gingerich, Herald Press publisher.

Indigenous Peoples suffer higher rates of poverty, unemployment, incarceration, suicide, and illiteracy. In The Land Is Not Empty (Herald Press, June 2021), Augustine investigates ways that the Doctrine of Discovery continues to devastate Indigenous cultures in North America. The Doctrine of Discovery was a set of 15th-century laws that gave Christian governments the moral and legal right to seize lands they “discovered.”  Land inhabited by “heathens, pagans, and infidels” could be considered “empty” and therefore free for the taking. The lingering legacy of this doctrine continues to justify the exploitation of both natural resources and people.

“The United States was founded on ill-gotten gains. And it has prospered,” writes Augustine. “Indigenous Peoples have been systematically disenfranchised and dispossessed as a matter of church policy for 500 years; by United States policy for 240 years.”

Sarah Augustine is founder and cochair of the Coalition to Dismantle the Doctrine of Discovery and executive director of the Dispute Resolution Center of Yakima and Kittitas Counties. Augustine, who is a Pueblo (Tewa) descendant, has written for Sojourners, The Mennonite, and other publications, and is an adjunct professor at Heritage University. She and her husband Dan Peplow and their son live in the Yakima Valley of Washington.

To schedule an interview with Sarah Augustine, contact LeAnn Hamby at 540‑908‑3941 or [email protected].