Last week I posted about “Where MennoMedia is going in the future,” a roadmap for our future, consisting of ten byways that will be part of our journey. Today, on my way to NYC to attend the Tools of Change Conference (more on that next week,) I’m going to look at byway #1: Expanding our audiences.

About five years ago, I visited Cheltenham, in the UK. The city center was vibrant and busy, with an attractive pedestrian mall. Cordoned off in the center—at the backs of all the surrounding stores—was the historic church, appearing somewhat lonely, perhaps somewhat irrelevant. Like many historic churches in Europe, it sits largely empty and neglected, a vestige of the past. This is not surprising; In the UK only around 3% of the population attends church once per month. Cathedrals and other religious sites that once thronged with pilgrims are now just museums at best, ruins at worst. 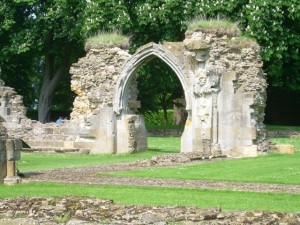 I often think about that image of Cheltenham in my work. In the U.S., while 43% of the population say they attend church, on any given Sunday you are likely to only find half of them present—meaning weekly church attendance is not relevant to nearly 4 out of 5 people. Up North, according to a story in the Globe and Mail from last October, only 22% of Canadians think religion is important in their lives. On both sides of the border, these statistics have been declining for decades.

These stark facts have a huge impact on our work in religious media. While we used to be able to take it for granted that the larger population understood our lingo, that’s just not the case anymore. While some lament the change, as Anabaptists, we see an opportunity. We have the chance to reach out to vast audiences like never before, audiences that seem more attuned than ever to a fresh message that includes peace, justice, community and personal transformation—all of which are traditional Anabaptist values and virtues. I hope and expect that as we work toward the future, we will need to learn how this vast and new audience speaks, thinks and seeks—and expand our capacity to speak to this audience. Topics that matter to everyone—economic, cultural, spiritual and environmental—have to be part of our message. Christian faith can and ought to be relevant to the biggest conversations of society and we have to get our message out in the places those conversations are happening. Becoming simply irrelevant would be worse than sliding sales and declining revenues.