Cookbooks can be a bit like diaries: paging through their rippled and stained pages, you recall daily routines, holiday celebrations, and even the tragedies that have composed your life. Here is the recipe for lemon cake you made for your daughter’s birthday; there is the vegetable platter that you had at your wedding; here is the enchilada casserole the woman from church brought when your father died.

But sometimes even well-loved cookbooks—or perhaps especially well-loved ones—need some assistance. Here are two photographs of my personal copy of Extending the Table, the second in the World Community Cookbook series published by Herald Press: 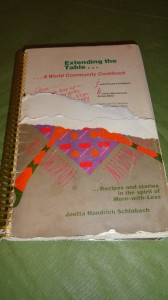 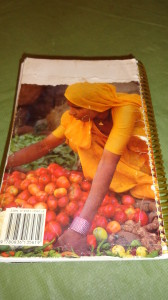 This book has obviously seen better days. Half of the front cover has been ripped off—likely during one of the seven moves I’ve made during the past twenty-two years, or else in the hands of a toddler accomplished in all things destructive. The back cover apparently fell victim to something (or someone) as well.

Published in 1991 and compiled by Joetta Handrich Schlabach, Extending the Table has helped thousands of cooks prepare recipes from around the world. Commissioned by Mennonite Central Committee “to promote global understanding and [to] celebrate the variety of world cultures,” Extending the Table has brought global dishes, such as supu ya mchicha and adobong gulay to the kitchens of cooks in the United States and Canada. Perhaps as important as the actual recipes in Extending the Table are the many stories and prayers that the book contains. Stories of hunger, hospitality, generosity, stewardship, and celebration—often in the midst of few material resources—are central to the book. In fact, many people say Extending the Table is as much a book about learning from sisters and brothers from around the world as it is a simple “cookbook.”

As the photographs attest, Extending the Table has been one of the most reached-for cookbooks in my kitchen, and possibly yours, too. Your copy might not be as mangled as mine, but twenty-two years after it was published, it is likely to have sustained some grease splatters and other signs of loving use. Or if you don’t own a copy of Extending the Table, perhaps you’ve bought it for a young couple at church for a wedding gift or for a recent college graduate who just moved into her own apartment. There are an estimated 122,000 copies of Extending the Table in circulation, a testament to readers’ and cooks’ interest in broadening their worldviews through what we eat.

So here is the big news: I am excited to announce that MennoMedia is revising, re-designing, and re-releasing Extending the Table in 2014. The new version will contain many of the recipes, stories, and prayers that appear in the 1991 edition. Our hope is that the revised version will be even more attractive to twenty-first-century cooks, even as it extends the witness and tradition of those who cook with friends from around the world in mind and heart.

Because we will be adding photographs of several of the dishes, as well as a few new recipes, some of the recipes in the current edition will have to go. So here is the even more exciting part: you can be involved in extending the life of Extending the Table! Help to choose which recipes make the cut for the revised cookbook. You can vote for your favorite recipes by filling out a survey that is available at

by May 15. As a thank you for helping us choose recipes, you will receive a 30 percent discount on the new edition of Extending the Table and be entered in a prize drawing for three global-cuisine gifts*. Or if you’d prefer not to take a survey but simply want to make a list of your favorite recipes from the book, send the list in an email to me at: [email protected].

So pull out your own dog-eared copy of Extending the Table, bring up the survey on your screen, and simply click on the recipes that you want to make sure get into the new edition.  When you’re done, you will know that you have played a crucial role in helping to bring the best of international cuisine—and the witness of global Christians—to cooks close to home.